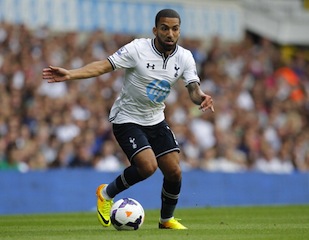 Everton signed Tottenham winger Aaron Lennon on loan until the end of the season just before the transfer window closed on Monday.

Lennon had started just three Premier League matches since Mauricio Pochettino took over as Tottenham manager last year and the England international has been allowed to leave White Hart Lane to revive his career.

The 27-year-old played 267 times for Spurs after arriving from Leeds for £1 million ($1.5 million) in 2005 and won the League Cup in 2008, but he never quite fulfilled his full potential in north London.

Everton boss Roberto Martinez beat Stoke and Hull to Lennon’s signature and he hopes the winger, who won the last of his 21 England caps two years ago, will bring a much-needed spark to his side, who are 12th in the league after a disappointing campaign to date.

“We all know what Aaron will bring to our squad with his experience and know-how, his involvement with England in two World Cups and the landmarks he has set in the Premier League,” Martinez told Everton’s website.

“At 27, Aaron will be a really important asset to our squad and he will represent a real boost in terms of attacking options from now to the end of the season. His pace and trickery will fit in well at Goodison.”