Patricia Etteh dumps PDP For APC, says she wants to be a 'progressive' 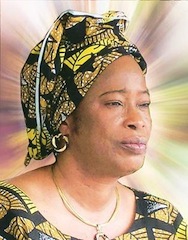 Patricia Etteh: wants to be a 'progressive'

Former Speaker of House of Representatives, Patricia Olubunmi Etteh has dumped the Peoples’ Democratic Party (PDP) for the All progressive Congress (APC) in Osun state.

Etheh’s and her supporters from in Irewole, Ayedaade and Isokan Federal constituency stormed APC rally led by Governor Rauf Aregbesola of Osun.

At the rally, Etteh told supporters that she decided to join the APC because it is a party of progressives, noting that, its policies and agenda were people-oriented and people-focused.

She stated that her defection will enable her contribute her quota to the development of the people in the state and the country.

She commended Aregbesola for the giant stride and change his government has brought to the state in the last four and a half years, noting that, the
transformation of the state under APC is glaring for all to see. ‎

While speaking, Aregbesola who welcomed the former Speaker and her supporters from Ikoyi, Apomu, Ikire, Araromi Owu, Orile Owu and Gbongan‎ enjoined voters in the local government areas and the whole state to vote for all the candidates of APC across board.

He pointed out that change can only come when the APC presidential candidate, Gen. Muhammadu Buhari comes to power by May 29 this year.

“February 14 and 28 elections are significant for the change that Nigerians have been clamouring for, we need not say much. Our good work has been speaking for us, we plan do more than what we have done in the last four years.