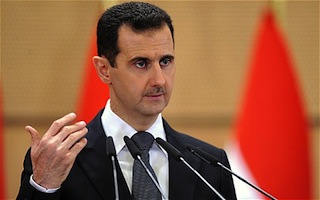 The Islamic State group’s gruesome murder of a captured Jordanian pilot is the consequence of Amman’s support for Syrian rebels, Syrian media said on Wednesday.

The commentary in newspapers close to the government echoed longstanding claims by President Bashar al-Assad’s regime that Jordan is backing “terrorists” by supporting rebels.

It came a day after a video purporting to show Jordanian pilot Maaz al-Kassasbeh being burnt alive in a cage by jihadists from the Islamic State group.

“The fire of the terrorist group burned the Jordanian after Amman facilitated… the entry of thousands of Salafists across its border so they could fight alongside armed groups against the Syrian Arab army,” the daily Al-Watan wrote, using a term for Islamic fundamentalists.

“Jordan is reaping the results of its support for terrorism,” added the Al-Baath daily.

Syria’s foreign ministry Wednesday condemned Kassasbeh’s murder but called on Amman to cooperate with the Syrian government against “terrorism”.

It described the execution as a “despicable, terrorist crime” and urged “the government of Jordan to cooperate in the fight against terrorism like that of Daesh (IS) and Al-Nusra Front (Al-Qaeda’s Syrian branch)”.

Jordan has joined a US-led coalition carrying out air strikes against IS in Syria and Iraq.

Damascus has grudgingly accepted the strikes on its territory, but said the coalition will fail to defeat IS unless it cooperates with Assad’s government.

The head of the opposition Syrian National Coalition offered his condolences for the “barbaric act” of Kassasbeh’s killing.

“I offer my sincere condolences on the execution of First Lieutenant pilot Maaz al-Kassasbeh, whose blood mingled with the soil of our beloved Syria,” said Khaled Khoja.

“I strongly condemn this barbaric act, which symbolises the pure evil that the terrorist group represents, and the deepest of depravity to which they are prepared to sink,” he added.

Khoja urged the international community to “stand by the Syrian people and end their suffering caused by the Assad regime and IS alike.”