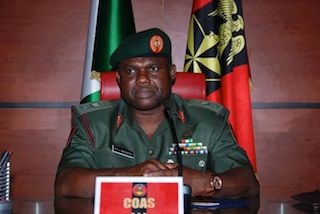 Nigerian Army said on Tuesday that it was not aware of plans to foist an interim government on the country.

Colonel Sani Usman, Acting Diector of Army Public Relations said this in a statement issued in Abuja in obvious reaction to speculations that the Chief of Army Staff, General Kenneth Minimah will be appointed as the head of interim national government if President Goodluck Jonathan failed to get re-elected.

Nigeria’s main opposition party, the All Progressives Congress had also in a statement on Tuesday raised alarm of a sinister plot by the ruling Peoples Democratic Party not to hand over power to its candidate for the presidential election, General Muhammadu Buhari, in the event that President Goodluck Jonathan loses his re-election bid.

But Usman, in the statement on Tuesday, said: “The attention of the Nigerian Army has been drawn to spurious and unsubstantiated allegations being circulated particularly, in the social media about the Nigerian Army, the Chief of Army Staff and some serving senior officers.

“Any discerning mind would notice that these false and baseless allegations are calculated attempts by unpatriotic elements to divide the Nigerian Army, create disaffection among its ranks and distract the service from its avowed constitutional duty of defending the territorial integrity of our great nation.

“Unfortunately for these individuals, their effort which are reminiscent of the NADECO days are obviously aimed at reversing the gains made and the renewed efforts in fighting terrorism and insurgency in the country is failing woefully.

“Before dealing with these allegations, it is important to note that these efforts are renewed attempts by the same faceless groups who since last year have made futile efforts to politicize ongoing Counter-Terrorism and Counter-Insurgency operations of the Nigerian Army and other security agencies.

” It will be recalled that late last year, the same group using the stolen identity of a serving Lieutenant Colonel, wrote a petition to the President making all sorts of unfounded allegations.

“The petition was thoroughly investigated by relevant security agencies. The findings indicated that the petition was indeed the handiwork of faceless and unpatriotic individuals who seek to distract the Nigerian Army.

“The latest effort by these same group and their collaborators is the sensational and outrageous claim that the Chief of Army Staff is preparing to assume the leadership of this country through an interim government, in the event that the opposition party wins the 2015 general elections at the federal level.

” This is dangerous, condemnable and a great disservice, given the tremendous sacrifices of the Nigerian Army in support of democracy in our nation. This deliberate attempt to erode public confidence and trust in the Nigerian Army will not be tolerated and the masterminds of these campaigns of calumny are advised to desist from their nefarious activities forthwith.

“Similarly, a letter has also surfaced in the social media purportedly written by “Concerned Officers and Soldiers of Operation Zaman Lafiya”. This is a rehash of the same issues peddled by the writers of a similar petition written last year using the stolen identity of a serving military officer.

“Also, another online medium has claimed that two serving Major Generals of the Nigerian Army have tendered “a letter of resignation” over an alleged disagreement with the Chief of Army Staff during a MEETING.

“It must be stated categorically that the Nigerian Army is apolitical. In the same vein, it does not tolerate any of its officers or soldiers being involved in political matters. In this regard, it is recalled that the Chief of Army Staff while addressing the Passing Out Parade of 71 Regular Recruits Intake at Depot Nigerian Army Zaria, recently, reiterated this thus, “As you all aware, this is an election year. I therefore urge you to read and understand the code of conduct for military personnel during elections. You must remain apolitical at all times and in all situations. You must also see yourselves as ambassadors of the Nigerian Army and project the image of the Service positively at all times. To achieve this, you are expected to discharge your duties diligently, professionally and patriotically.”

Usman added that: “It is pertinent to restate the fact that the Nigerian Army remains committed and loyal to the Constitution of the Federal Republic of Nigeria and the President, Commander-in-Chief.

“The Army is conscious and committed to its subordination to constituted civil authorities. Politicians and their agents and agencies should please desist from attempts to drag the Nigerian Army into their political issues. Nigerian Army welcomes genuine complaints against individual officers and soldiers. Cases of alleged corruption or misconduct should therefore be directed to the appropriate civilian or military authority, instead of embarking on unfounded smear campaigns that will achieve no result.