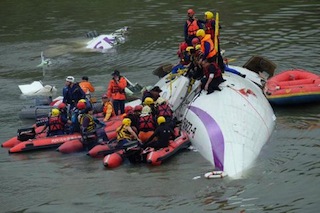 A low-flying passenger plane with 58 people on board clipped a road bridge and plunged into a river outside Taiwan’s capital Wednesday with nine feared dead and dozens trapped inside.

It was the second serious incident involving a TransAsia Airways plane in a few months after another flight operated by the domestic airline crashed in July during a storm, killing 48 people.

Amateur video footage from Wednesday’s accident showed the TransAsia ATR 72-600 turboprop plane hit the road bridge as it banked side-long towards the water, leaving a trail of debris.

“Three people showed no heartbeat and other life signs when they were rescued,” said Lin Kuan-cheng, the official from the national fire agency.

One TV report said up to 10 people were feared dead from the crash of Flight GE235. However, a statement from the National Emergency Operation Center confirmed only two dead so far.

A major operation including army troops was under way to reach people who remained trapped inside the fuselage, with 17 rescued so far, according to reports.

Rescuers standing on large sections of broken wreckage tried to pull passengers out of the plane with ropes. Those who were rescued — including two children — were put in dinghies and taken to the shore.

Some were then loaded on stretchers.

Aviation officials said the plane crashed minutes after taking off after losing contact with the control tower.

There were 58 people on board, including five crew members, they said.

Eight rescue boats and more than 15 ambulances as well as around 100 soldiers were working on the rescue operation, an AFP reporter at the scene said.

The plane wreckage remained in the middle of the river, surrounded by dinghies.

The accident happened just before 11:00 am (0300 GMT), shortly after the plane took off from Taipei’s Songshan airport en route to the island of Kinmen.

In last July’s crash, the 48 people were killed when another domestic TransAsia flight crashed onto houses during a storm on the Taiwanese island of Penghu.

The ATR 72-500 turboprop plane deviated off course before plunging into the houses after an aborted landing during thunder and heavy rain as Typhoon Matmo pounded Taiwan at the time.

The flight’s pilots could not see the runway but continued to descend anyway, Taiwanese authorities said in December. Two French nationals were among the dead.