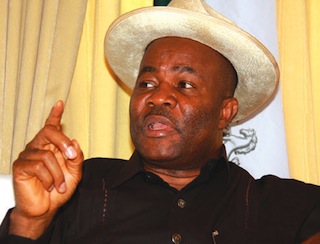 The Supreme Court on Wednesday fixed March 27, 2015, for judgment in an appeal brought by Mr Frank Okon, seeking to nullify the election of Gov. Godswill Akpabio of Akwa Ibom.

The apex court’s panel of five judges led by Justice John Fabiyi, reserved judgment after hearing the submissions of counsel to parties in the suit who adopted their various processes.

NAN recalls that Okon had sued Akpabio seeking to nullify Akpabio’s election in the Jan. 15 and April 26, 2011 PDP primary and general elections.

The appellant had urged the Abuja Federal High Court to declare him as the winner of the re-run of Jan. 15, 2011 Akwa Ibom PDP gubernatorial primaries and the April 26 elections.

Okon had argued in his submission that he was the candidate of the PDP in the election, having been screened and cleared to participate in the said election but was denied the ticket.

Delivering judgment, the trial judge, Justice Abdul Kafarati had held that the plaintiff lacked the locus standi to institute the suit, having failed to participate in the primary elections.

Kafarati further held that mere possession of PDP’s nomination form, without participating in the primary election proper to select the party’s candidate, was not a ground to challenge the election’s outcome.

The court had also declined jurisdiction to determine the suit and dismissed it forthwith.

Not satisfied with the trial court’s decision, Okon proceeded to the Court of Appeal, Abuja Division, urging the court to set aside the lower court’s judgment, pleading miscarriage of justice.

The Court of Appeal on Nov 20, 2013, however, dismissed Okon’s appeal, following which he again approached the Supreme Court seeking to nullify the governor’s election and declare him governor.