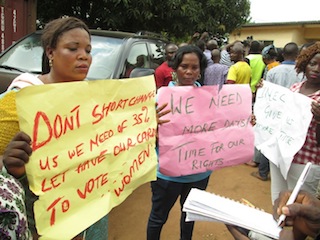 FILE PHOTO of a protest

Oshiogbele made the accusation in Auchi on Thursday during a combined protest by members of the union and members of the Senior Staff Association of Nigeria Polytechnic (SSANIP).

The protesters who marched to the palace of the paramount ruler of Auchi, over alleged illegal deduction from their salaries and failure of the management of the institution to enroll them into the Integrated Personnel Pay Roll Information System (IPPIS)‎, stating that, members of the NASUP could no longer access loans from the union’s purse due to the huge amount of money borrowed from the its account by management of the institution to the tune of N400 million.

Oshiogbele further alleged that the inability of the school management to key into IPPIS is causing salary disparity as staff salaries were different from that of their colleagues in other polytechnics.

“As I speak, I am on CONTISS 15, my counterparts in Yaba Tech receive a salary disparity that is different from my own. So we are saying if you key into this IPPIS, we will be able to solve the problem.

“The e-payment system is good and government have put this on ground for the past three years. One of the thing we want to checkmate and put a stop to is the salaries disparities,” he said.

Mr. Godwin Ikhide who spoke for the SSANIP members at the palace of the ruler, alleged that there have been shortfalls in staff salaries due to inability of the management to enroll them on IPPIS.

“What has brought us out here is the situation of non compliance with government directive by management of Auchi polytechnic.

“For the past eight months, the salaries of staff in Auchi polytechnic have been paid with augmentation from welfare savings and union deduction of staff.

“What that translate to is that we have been using our money to pay ourselves and this has been on ground and the management has explanation, and explanation must be given to us.

“This has come to be a short fall of money expected from our remuneration,” he said.

Ikhide further claimed that the inability of the management of the polytechnic to key into the IPPIS has led to short changing of workers’ salaries.

“To solve this problem we now began to look into what other polytechnics are doing and we feel that this problem can be solved by keying into the polytechnic into centralised e-payment system, indeed the Integrated Personnel Pay Roll Information System (IPPIS) is the direct government system of payment.

Reacting to the development, the Deputy Rector (Admin), of the institution, Dr. Fred Aigboighale, admitted that management of the polytechnic actually owed the union the sum of N400 million.

He however disclosed that the school management had set up a committee to liaise with the Accountant-General of the Federation on commencement of the IPPIS implementation.