Edo commissioner joins to PDP from APC after fraud findings 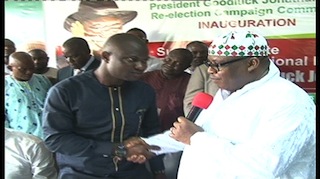 Edo state government has explained the reason for the sudden exit of Mr. Dennis Idahosa from the State Executive Council as Commissioner of Investment, Public/Private Partnership.

Idahosa claimed he dumped the All Progressives Congress (APC) for the opposition Peoples Democratic Party (PDP) in the state because he could no longer tolerate the abusive languages Governor Oshiomhole has always used on President Goodluck Jonathan and other elders of ‎the PDP.

Although he is yet to resign his ‎appointment as Commander under the administration of Governor Adams Oshiomhole, he made public his defection last Saturday during the campaign rally of President Goodluck Jonathan at the Samuel Ogbemudia stadium in Benin.

But in a press statement by the State Commissioner for Information and Orientation, Mr. Louis Odion, the state government explained that Idahosa quit‎ because of his “fraudulent activities (popularly called 419).”

“We wish to state that in the last two months, the state governor, Comrade Adams Oshiomhole, have received series of petitions, mostly from abroad, alleging that Mr. Idahosa was engaged in fraudulent activities (popularly called 419) on an industrial scale. The petitioners, purporting to be his victims, alleged they have been swindled of huge sums of money.

“Disturbed and consistent with his zero tolerance for corruption or any conduct that might tarnish the image of Edo state or bring the country to international odium for that matter, Comrade Oshiomhole had late year set up a high-level administrative panel to look into the grave allegations discreetly.

“After weeks of forensic investigations, the panel’s findings were startling. Last week, Mr. Idahosa became aware that the administrative panel was on the verge of formally requesting him to answer those weighty charges. As a matter of fact, last Thursday (January 29), Mr. Idahosa had attended APC Mega Presidential rally at the Samuel Ogbemudia Stadium that was well attended in his capacity as Commissioner. Curiously, he would dramatically reappear barely 24 hours later at the secretariat of People’s Democratic Party (PDP) announcing his defection.

“We do not want to join the speculation that Mr. Idahosa’s defection was designed to pre-empt the report of the administrative panel or his action motivated by an external offer of protection. However, in the name of decency and justice and international image of our country, we can only encourage Mr. Idahosa to come out in the open and answer the sundry allegations of 419 leveled against him. Otherwise, the long arms of the law, though may be delayed by his new powerful friends, will ultimately prevail,” the statement said.