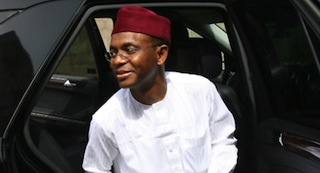 El-Rufai made the promise while fielding questions from newsmen on Thursday shortly after a campaign in Kafanchan, Kaduna State.

He said that his administration would provide sufficient fertiliser and agro-chemicals to farmers to boost the production of food and cash crops for local consumption and export.

“Our administration will pay close attention to this sector which once upon a time was the main stay of Nigeria’s economy.

“We aspire for a government where there will be adequate distribution of fertiliser to all local farmers, irrespective of their political affiliations.“

On security, the APC flag bearer promised to work with all security agencies to protect lives and property.

El-Rufai also called on the people to be vigilant and vote for all candidates of the party in the forthcoming elections.