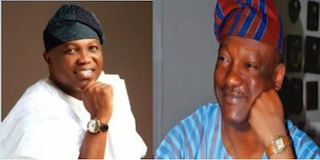 Three governorship candidates in the February elections in Lagos state, western Nigeria were on Thursday placed on the hot seat by women in the state who wanted to know their plans for the state and also extract promises from the candidates should any of them become the next governor.

The three candidates who answered questions from the women in an event organised by the Cosmopolitan Women’s Club with the theme: ‘What About Women?’ include Akinwunmi Ambode of the All Progressives Congress, APC; Jimi Agbaje of the Peoples Democratic Party, PDP; and Oloye Gboyega Adeniji of the KOWA Party.

While addressing the gathering, Ambode, who said he would continue to learn from the women, added that, the role of women in any nation is second to none and that women have continued to prove to be a pivotal force for progress.

He said he was raised by a woman and as a result, understands the challenges of the women In our society. “Our government shall pursue equal treatment of men and women in workplaces. There would be same conditions of services for both the male and female workers.

“Our government will prioritise laws against domestic violence and empower women.

“I am more for women’s right and equality. While I was the Accountant-General, I had six women directors and two male directors. We wish to see sometimes soon, women governors and women speakers of the House of Assembly in Lagos state.

“My commitment towards women in everything I do is very personal. No girl would be denied good education. You can hold me accountable for every word that I have spoken,” he said, adding that, there would be laws to protect the women.

He said his government would institute the Employment Trust Fund with an initial N25 billion to cater for talented youths and women.

Concerning complaints about multiple taxation in the state, he said he would harmonise and consolidate the taxes in the state.

He also said the toll gate would remain, arguing that, funds derived from the tolls have been useful to the government and the people of the state because it had helped with the provision of basic amenities and jobs.

In his statement, Agbaje, who said Ambode had spoken his mind concerning what he would do about multiple taxation, said the role of women in the society remains very important.

“In the choice of running mate, I chose a female, not just to make you happy but because of the demography,” he said, adding that, it was his choice to pick a lady who would add value, not one to intimidate him.

“I don’t personally believe in youth organisation in campaigns. Just be part of it,” he said while urging the women to be part of the election process.

“It is getting better what the women are getting, but the challenge is in the political equation for women. The statistics has remained stagnant.

“Educations for us is priority. Our education is not right, not just in Lagos, but the nation. There are more children in private primary schools than public.

“There is need to get the foundation right so that other things can fall in place.

“Bill Gates and co were school drop-outs but they had the basic education. A child that cannot think in English cannot get things right,” he said, promising that his government would concentrate on basic education.

On health, he said: “we must put a model in place that is sustainable especially for the vulnerable. The government would engage in a public private partnership where the patients can choose their doctors.

“We are not trying to re-invent the wheel but we are saying as Lagos, a megacity, we need to lip and not just crawl.”

He also committed himself to between 20 to 25 percent appointment of women into government and promised to scrap the Lekki-Epe Toll Gate if elected governor.

Adeniji, while addressing the women, said his party was gender-friendly listing the Chairman, Board of Trustees of the party as well as the party’s presidential candidates as women.

“We try to encourage women to come out and seek elective positions, but they said politics is dirty,” he lamented.

He said his party was poised to give the real change that Nigerians desire describing the country as rich, but with people who are poor.

“The programme of KOWA party is for children to be given the necessary training so that when you graduate, you don’t have to go cap-in-hand looking for job.

“Any child at the age of seven and eight that cannot read and write is finished. Our educational policy is such that no child would travel more than one kilometre from his place of abode.

“Pre and post-natal health would be free,” he said.

Concerning multiple taxes, he said the state would be made to collect corporate tax while the local government collects market tax.

Hajia Bintu Fatima-Tinubu, who chairs the Cosmopolitan Women’s Club, said the interactive session with the candidate was organised to find out where they are placed by the candidates.

She noted the importance of women in the development of the society and added that no responsible politician would jettison them.

She also admonished youths in the country to shun being used by politicians to perpetrate violence while keeping their own children abroad.