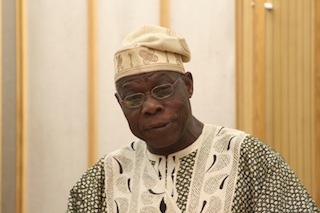 Former president, Chief Olusegun Obasanjo, may have adopted a ‘siddon look’ attitude on Nigerian affairs, at least for now.

The former president said he has stopped further commentaries on the state of affairs in Nigeria, till after the presidential election result.

Obasanjo announced the cessation of comments at an event in Kano, saying his previous speeches and body language were enough to be understood.

Responding to questions from newsmen in Kano on alleged crack in the Nigerian Army and the massive relocation of Nigerians to their home states over fears of post-election crisis, Obasanjo said he had decided to reserve his comments on the country for now.

The former president was in Kano to commission the second mega flyover bridge built by the state governor, Engineer Rabiu Musa Kwankwaso.

Obasanjo had in another development also told traditional rulers from the Egba Traditional Council who converged in Abeokuta for a one day seminar on how to generate wealth from their wastes while maintaining good hygiene in their environments that he had at different fora, already made his views known on the elections, in both speech and body languages in the interest of the country.

He said those were enough for anybody to make an informed decision before going to the polling unit to cast his or her vote. The former president lamented a situation where teachers and civil servants are being owed salaries for up to six months, citing Benue State as example.