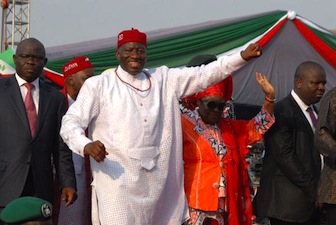 Edo state chapter of the Peoples Democratic Party (PDP), is currently embroiled in fresh crisis over alleged non-disbursement of mobilisation funds provided for the hosting of last Wednesday’s presidential campaign rally in Benin, by Goodluck Jonathan Campaign Organisation, as hundreds of angry youth on Friday sealed the state secretariat of the party, alleging that they were shortchanged by the organising committee.

The youths numbering over 250 ‎under the auspices of Grassroots Youth Initiative (GYI), carried placards bearing inscriptions such as “PDP pay us our money; Our youth must grow.”

They stormed the party’s secretariat located along Sapele Road in Benin City and sealed it over the non-payment of their appearance fee at the Dr. Samuel Ogbemudia Stadium-venue, out of the campaign rally out of the N1.2 billion allegedly provided for the rally.

The protest virtually locked up the ever busy Sapele road for several hours as the youths said it is either their money or nothing else after they allegedly refused the N20,000 said to have been offered to them on the night of Thursday.

They specifically accused Edo State Director General of President Jonathan Campaign Organization, Pastor Osagie Ize-Iyamu, who recently defected to the PDP from APC, of being responsible for keeping the money meant for them.

National President of GYI, Osarobo Idahosa, who spoke for the protesting youths, said he was part of the campaign planning committee in the state but was surprised that only N20,000 was given to him to pay thousands of youths mobilized to the rally.

He alleged that he personally mobilised youths to the stadium but was yet to be paid any money.

Another protester who gave his name as Cromwell Aigbona, said the youths would not be used and dumped this time around. “It is a new time and a new dawn. It is time our leaders recognized that there are youths in the state. We will not be used and dumped. The time has come for the youth to say to use and dump. We want transparency. ‎Our money has not been given to us. That is why we are here. We want to tell the leaders of PDP that we want to move on,”‎ he said.

One of the leaders of PDP in the state who asked not to be named, however alleged that the protest was sponsored by a former governorship candidate of the party and founder of Goodluck to Goodluck Organisation, Gen. Charles Airhiavbere.

‎”The money was shared to all the leaders. Ize-Iyamu is not concerned about this money. This protest is because of one person within the party. Airhiavbere, paid and sponsored this protest.”

Reacting to the allegation by the anonymous party leader, Gen. Airhiavbere simply said, “He must be out of his mind. They should address their problems.”

Pastor Ize-Iyamu, on the other hand, accused the state chapter of the APC of sponsoring the protest out of envy because of the large crowd that attended the PDP Presidential rally.

Ize-Iyamu who denied collecting N1.2 billion for the campaign rally, said what was spent on the rally was less than what the APC spent on its rally.

“We have never seen that kind of a crowd at a rally. We are optimistic that this will translate to votes for us on February 14. The APC was terrified about the rally attendance.