MTV Base Premieres Choose Or Lose 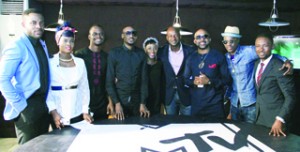 Nigerian music stars 2Face, Sound Sultan, Banky W and Yemi Alade, as well as TV personality Ebuka, activist Omojuwa and journalist/writer Stanley Azuakola have gathered at the instance of MTV Base to discuss the burning issues facing youths in Nigeria as well as encourage citizen voter participation ahead of 14 February elections.

Hosted by Oreka Godis, the MTV Base Roundtable tagged Choose Or Lose, will premiere this evening 6 February on MTV Base and STV. The show features a stimulating debate from these key opinion formers as they address vital and topical issues in Nigeria  such as Education, Power, Leadership and Healthcare.

The roundtable is part of MTV Base’s special election campaign  which encourages youths to go out and vote for candidates they believe will make the greatest impact in the development of the country as well as their future.

The campaign, which rolls out on TV, digital and social media platforms, features celebrities as well as members of the public as they underline the important message of youth participation in the electoral process.

“It is impressive to see the passion with which these key opinion formers engage with, and discuss the issues that are important to Nigerian youths. Our hope is that our hoose or Lose” campaign will serve as the catalyst for greater youth voter participation,” Okosi said.