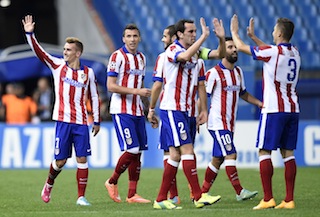 Atletico Madrid blew the La Liga title race wide open by extending their unbeaten run over Real Madrid to six games this season with a 4-0 thrashing of the European champions on Saturday.

First-half goals from Tiago and Saul Niguez put Atletico in command before Antoine Griezmann and Mario Mandzukic sealed a first home league win over Real since 1999 just after the hour mark.

Atletico have now beaten their city rivals twice in La Liga and over two-legs in the Spanish Supercup and Copa del Rey this season to bounce back in fine style from their heartbreaking loss in the Champions League final last season.

Real still lead Los Rojiblancos by four points, but Barcelona can move to within a point of the leaders should they beat Athletic Bilbao on Sunday.

World Player of the Year Cristiano Ronaldo returned from a two-game ban, but the visitors were otherwise depleted without the injured Sergio Ramos, Pepe, Luka Modric, James Rodriguez and suspended Marcelo.

Atletico suffered an injury blow of their own after just 10 minutes when Spanish international Koke limped off, but that curse turned into a blessing as he was replaced by Saul.

The hosts went in front on 13 minutes when Mandzukic laid Juanfran’s cross from the right into the path of Tiago on the edge of the area and the Portuguese’s low effort had too much power for Iker Casillas, who will feel he should have kept it out.

Four minutes later Atletico doubled their lead with a move of real quality as Guilherme Siqueira hurtled down the left and his cross was acrobatically turned home by Saul with an overhead kick.

Atletico’s advantage at the break could have been even greater as Griezmann had a goal marginally ruled out for offside and strong claims for a penalty against Sami Khedira were waved away after he blocked Diego Godin’s effort with his hand.

Real offered barely anything as an attacking threat in the first period and coach Carlo Ancelotti responded by introducing Jese Rodriguez for Khedira at the break.

However, it made little impact as Real failed to muster a single shot on target during the 90 minutes.

Griezmann came close twice more with a powerful shot that Casillas parried before also trying his luck with an overhead kick that flew inches over.

The Frenchman did get the goal his performance deserved 24 minutes from time when Saul headed Arda Turan’s cross back across goal and he outmuscled international teammate Raphael Varane to prod home from a yard out.

And Real’s embarrassment was complete a minute from time when substitute Fernando Torres crossed for Mandzukic to power home a header into the far corner.