Blasts kill at least 27 in Baghdad 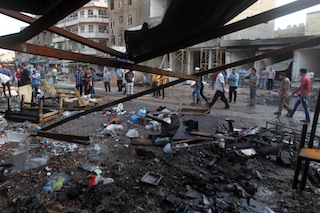 FILE PHOTO: Iraqis stand at the scene of the aftermath of a car bomb in Baghdad

Attacks in Baghdad including a suicide bombing inside a restaurant killed 27 people on Saturday, hours before a years-old nightly curfew is due to be lifted, officials said.

The suicide bomber struck in the Baghdad Jadida area in the capital’s east, killing at least 22 people and wounding at least 39.

There was no immediate claim of responsibility for the blast, one of the deadliest to hit the capital in months.

But suicide bombings in Iraq are almost exclusively carried out by Sunni extremists, including the Islamic State (IS) jihadist group.

IS spearheaded a sweeping offensive in June that overran large areas north and west of Baghdad, and Iraqi forces are now battling to push the jihadists back.

Another attack — said to have been either a suicide or roadside bombing — hit a commercial area in central Baghdad, killing at least five people and wounding at least 13.

Saturday’s attacks illustrate the persistent danger of violence in Baghdad even as the nightly curfew was set to end at midnight (2100 GMT) in the city.

Lifting the curfew is a major change to a longstanding policy aimed at curbing violence in the capital by limiting movement at night, which has failed to stop frequent bombings.

Prime Minister Haider al-Abadi ordered the move this week, a decision his office said was taken so there would “be normal life as much as possible, despite the existence of a state of war”.