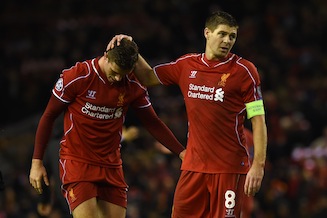 Liverpool extended their unbeaten run in the Merseyside derby to 10 games but departing captain Steven Gerrard had to content himself with a 0-0 draw at Everton on Saturday.

Gerrard was playing in his 33rd and last Premier League game against Everton, who he will not line up against again unless the two sides meet in the Europa League.

But an 18th victory proved beyond him as Liverpool’s climb towards the top four was slowed on a lacklustre evening at Goodison Park.

Brendan Rodgers’s team had won their previous three league games, but Everton, without a victory in this fixture since October 2010, proved unyielding opponents to leave Liverpool four points below the Champions League places.

In contrast to Gerrard, 19-year-old winger Jordon Ibe made just his second Premier League start for Liverpool after being recalled last month from a loan spell at Championship club Derby County.

Almost inevitably, though, it was Gerrard who had the first effort on goal with nine minutes gone.

The former England captain — second only to Ian Rush as his club’s highest scorer in derby matches with 10 goals — saw a 25-yard free-kick touched over the bar by Everton goalkeeper Joel Robles.

Robles had to be alert moments later to deny Ibe his big moment as he saved at the youngster’s feet after Raheem Sterling had found room to direct the ball across goal from the left.

But Robles was nowhere near a stinging long-range effort from Ibe in the 27th minute that crashed against the post following a surging run forward as Everton felt the absence of injured left-back Leighton Baines.

The home side did have James McCarthy back for the first time since Christmas following hamstring trouble and the midfielder was instrumental in trying to drive Everton forward in response.

Seamus Coleman and Kevin Mirallas were also productive down Everton’s right flank and from one Coleman cross, Steven Naismith should have done better than head the ball tamely into the ground.

More of the threat came from Liverpool, though, and they turned up the pressure at the start of the second half.

Philippe Coutinho twice slipped in Sterling for efforts that were saved by Robles and Gerrard saw a spectacular volley deflected just over his own bar by Naismith.

Rodgers looked to press home that advantage as just 10 minutes after the break he sent on striker Daniel Sturridge, who netted a late equaliser at Goodison last season in a 3-3 draw.

Everton manager Roberto Martinez countered by replacing Mirallas with new loan signing Aaron Lennon in a bid to take the initiative away from the visitors.

The England international, recruited on loan from Tottenham Hotspur on transfer deadline day, did help stem the tide with some positive early touches.

Decent chances remained elusive, however, as Everton looked for a first home win in four games and only a second league victory in eight after stopping the rot with three points at Crystal Palace a week ago.

Top scorer Romelu Lukaku looked an isolated figure, but Liverpool could not force a breakthrough themselves as Phil Jagielka blocked an effort from Sturridge.

Frustrations surfaced in the 77th minute in a flare-up that yielded bookings for Naismith and Muhamed Besic and Liverpool’s Jordan Henderson.

Naismith made way for Ross Barkley moments later and the substitute almost created a late winner for Everton as he helped the home side finish strongly.

The England playmaker perfectly teed up the rampaging Coleman, but the Irishman’s angled drive was well saved by Simon Mignolet to leave the honours even for the fifth time in six meetings.