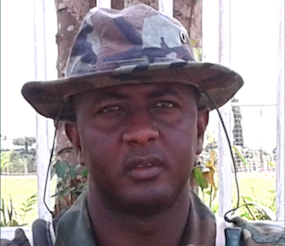 Captain Sagir Koli who leaked the #EkitiGate audio and documentary which had Governor Ayo Fayose, Senator Musiliu Obanikoro, Iyiola Omisore, Brigadier General Momoh and others planning how they will stifle and trample the opposition using the military and other security agencies said he did it for the unity of Nigeria and the military.

“In order to strengthen the unity and continue existence of Nigeria, I call on the federal Government to desist from using the military for partisan politics. This is to avoid the military from being divided along ethnic and regional lines which is dangerous to the defence of the nation,” Koli said.

In an affidavit titled: How the Nigerian Army personnel were used to rig Ekiti and Osun States Gubernatorial Elections 2014., Captain Sagir Koli gave details of all that transpired between himself, his Commanding officer, two Ministers and some politicians prior to the elections in the state.
See the full text of his submission below:

How the Nigerian Army personal were used to Rig Ekiti and Osun States Gubernatorial Elections 2014.

1. I was officially deployed as the 32, Artillery Brigade Intelligence Officer to provide credible Intelligence to the success of Ekiti State governorship election. At about 2030 hours on June 2014, a day to the election proper, the commander, Brigadier General AA Momoh told me to escort him to a place where the State Minister for Defence wanted to see him.

Reaching the place (Spotless Hotel in Ado- Ekiti), which serves as coordinating campaign office for the PDP candidate Mr. Ayodele Fayose, we met the Minister himself, Mr of Police Affairs, Mr Fayose, My Iyiola Omisore, one Honoruable Abdulkareem and host of other top PDP chieftains.

The Outcome of what was discussed that gave the party victory during the election are as follows:

A. They told brigade commander that they are on presidential assignment and they cannot afford to fail. Also, they told him that they were there to remove any obstacles that would block their victory and the commander is the key; therefore, he has no option but to collaborate with them. They said, if the commander play(ed) with them, his promotion is in their hands and the president and the chief of army Staff would be very angry with him and he knows what that means.

B.They directed that soldiers on election duty must work hand in hand with the PDP agents and give them all the necessary support they needed without limitation.

C. They ordered the arrest of selected APC stalwarts that could greatly assist the party during the election including the DG campaign organisation for Dr Fayemi Mr Bimbo Daramola. APC members in Ekiti State should be interviewed of what they went through. We were forced to do a dirty job for them with a threat of court martial.

D.They directed that soldiers must block APC members’ access to the electorates but all PDP supporters’ movement anywhere using a designated sticker with inscription, “National Security Task” it should be noted that some of these PDP agents were given NYSC uniforms because we were well briefed by the commander.

E. Chief Chris Uba who also said he was from the presidency entered Ado- Ekiti a day to the election accompanied by 16 commissioned Army officers (Major and below) led by Major Ujung of 82 Base Ammunitions Depot from Nigeria Army 82 Division Enugu. Their major task was to effect arrest and move secret materials and money. This money was brought from CBN Umuahia.

F. Chief Chris Uba was physically present with the soldiers and the commander at Forward Operational Base (FOB) close to government house in Ado- Ekiti. He personally supervised the movement of the strike force. This act of a civilian directing military operation is highly unprofessional and tarnishing of the military discipline and regimentation.

G. Chief Chris Uba entered Ado-Ekiti a day to the election accompanied by military/police escort with 2 black tinted Hilux Vans with “secret” materials according to him. Items inside the vans were 1000/500 Naria notes closed and cloned marked ballot papers.

H. Chris Uba, Minster of police Affairs, Obanikoro and Co said this is just a test run that should not fail and its to be done in SS and SW states, moreover, Rivers State to make sure Rotimi Ameachi bow to the federal government.

2. Based on the aforementioned, they succeeded in rigging the Ekiti State election with victory in all the 16 LGAs.

These really inspired them and they were with the euphoria that same would happen in Osun State. In preparation of the plans, they confirmed the posting of the commander and task him to prepare for Osun State election (remember that Osun State is not part of 32 Artillery Brigade Area of operations) but they ordered the Nigerian Army Construction Engineers Commander Brigadier General Adeyemi to proceed for 3 weeks compulsory leave until after the election just to pave way for General Momah to repeat the same dirty work that he has done to them in Ekiti State.

3. In build-up towards the Osun State elections, the commander directed me as his intelligence officer who has worked with him perfectly in Ekiti State to go ahead and recce (Army word for Spy or Survey ) the area as well as familiarize myself with all stake holders for the election. While I and my team were working for the operations, the commander was in Abuja re-strategizing how to use the military to rig the elections.

Feelers based on my discussion with him on phone confirmed to me beyond reasonable doubt that we were repeating the same compromise in Osun State.

My heart got burnt and become disenchanted and in total disagreement with such being professional junior officer aspiring to become a General tomorrow.

4. However efforts to explain my grievances prove abortive due to the military dictatorial hierarchy in channel of communication vis a vis threat of court martial from the commander.

I resorted to alert the APC high level officials with the aim of stopping Army from partisan involvement during election. A week to the election, the commander came back from Abuja and he made revelations being their final arrangement on how the PDP was to become victorious in Osun state as follows:

A. After welcome address by the commander, he thanked all his staff officers, and said “you all know who we are working for, so you guys MUST follow my direction. I am working for the presidency and the ruling party as you all know, is no longer a hidden thing” for those of you who are moles among us, the presidency is watching you, be careful because the consequence will be severe.

I learnt that some of you went to Lagos and met with Tinubu without knowing that his line is already bugged at Abuja, then we are in trouble, but before somebody will kill me I have to kill him first” (referring to me). The commander asked how many of us were involved, that I should say the truth, he now held a secret talk with the operation officer and military police officer to tie and handcuff me to Army HQs, from there I know that my life was in danger.

B. The commander categorically told us that the soldiers were to work under PDP agents while their platoon commanders only supervise the soldiers conduct. He briefed the officers that were working the list of agents and those to be arrested at the SGF office in Abuja and once the list is out everybody must work with accordingly.

C. The commander briefed us on the formation of a strike-force in conjunction with police, DSS and NSCDC and he would command the strike force directly. Their duty was to work directly with the PDP aspirant for arrest and intimidation of APC supporters in their strong hold.

D. Money was shared openly at the NYSC Permanent Orientation Camp Ede to the strike force to ensure compliance.

5. Having said all of the above, I must state before concluding that:

A, My brother Adamu Koli a 15yrs old school boy was under detention since on the 2nd August 2014. The boy stays with me at 32 Artillery Brigade Akure.

B. Brigadier General AM Dikko who they consulted initially for the scam insisted that the army must remain professional and apolitical, was disgracefully removed from his command which he served only for 7 months just to allow General Momoh to carry out the dirty work.

6. Last but not the least, to further substantiate my submission and how my dear-loving, hard-achieving noble calling was de-professionalized; here is the recorded voices of the Ministers, the aspirant and the Brigade Commander. Other officers present at the hotel were Major Aliyu and captain Adegoke who were also part of the officers that escorted commander to the venue where the compromise was made. Also conversation between the commander and Abuja could be traced via MTN, GLO, on the under listed phone numbers (between 20-21 June 2014).

7,Lastly, in order to strengthen the unity and continue existence of Nigeria, I call on the federal Government to desist from using the military for partisan politics. This is to avoid the military from being divided along ethnic and regional lines which is dangerous to the defence of the nation. I remain a patriotic Nigerian and a loyal professional army officer.

God bless you all