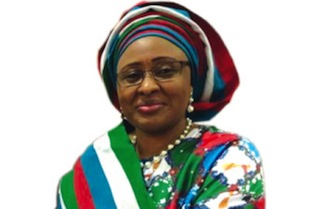 Aisha Buhari: advises Patience Jonathan not to be afraid of jail

The wife of All Progressives Congress (APC) presidential candidate, Hajiya Aisha Buhari, has called on Nigerians to accept the postponement of the nation’s general elections in good faith.

Buhari made the call on Sunday in Gusau, Zamfara, while addressing women groups in the state over the change.

Speaking through the wife of the Zamfara governor, Hajiya Asma’u Yari, she called on women not to be discouraged but be more resolute and remain committed to the party.

She said Nigerians should realise the importance attached to the coming general elections, and that they should not be discouraged by any change in the programme.

She assured that the extension would provide the opportunity for the party to scout for more support ahead of the elections.

Speaking in an interview with journalists after the meeting, wife of the governor, said that some mischief makers were going round rural communities to deceive people.

She warned that the state government was aware of the matter and had already directed security agents to arrest the perpetrators.

NAN reports that over 5, 000 women drawn from the 14 local government areas of the state, attended the rally.