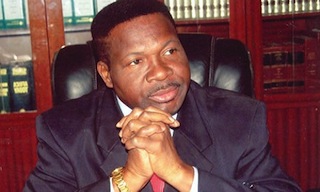 Ozekhome, a Senior Advocate of Nigeria (SAN), told the NAN on telephone in Abuja that security reasons cited by INEC for shifting the date of the elections were “weighty and formidable” enough.

He said that the elections could not have held in Adamawa, Borno and Yobe, under the prevailing insurgency in the North-East region of the country.

This, according to him, could have led to a serious constitutional crisis of great proportion.

Ozekhome said, “I have always made it clear that the entire country is the president’s constituency, not one state, not two, we are talking about 36 states.

“For a president to emerge he must have majority of the votes; that is the first requirement. Secondly, he must win at least 25 per cent in two-thirds of the 36 the states and the Federal Capital Territory.

“What this means is that for a presidential candidate to be president, he must win 24 states in Nigeria in addition to having majority of the votes.

“But, when three or four states are excised from the 36 states due to insurgency, can there be 25 per cent in 36 states without amounting to breaching the constitutional requirement?

“And my answer is ‘no’; it would lead to serious constitutional crisis of monumental proportion.”

Ozekhome also pointed out that sections 25 and 26 of the Electoral Act empower INEC to shift the elections for “cogent and verifiable resons”, which it had given.

Besides, he said that the six-week postponement was still within the statutory and constitutional period to conduct the elections in the country.

He, therefore, appealed to the Federal Government and security agencies to use the period to curtail the Boko Haram insurgency and restore peace to the North-East.

On his part, Darah said that it was reasonable for INEC to postpone the elections in order to minimise the difficulty of conducting the exercise. “Over 20 million people are yet to pick their permanent voter cards (PVCs), that is more than the population of many countries in the world.

He, however, remarked that the postponement could lead to voter apathy, but said that it was the responsibility of the political parties to motivate the electorate by sustaining the tempo of their campaigns.

Also speaking, Chairman of Isoko South Local Government Area in Delta, Mr Itiako Ikpokpo, said the postponement was good for the country’s democracy and not to the advantage or disadvantage of any political party.

He said; “It is not about APC or PDP, but about Nigerians exercising their rights. And we also know that we have security situation in the country. “We have a situation where a part of the country will not vote and if at this point, the military feels that there is a need for us to postpone a little within the ambit of the constitution, I don’t think there is any issue in that.

“So, for me it is victory for Nigeria; after all, it is not INEC that votes, but we the electorate. It’s not about PDP; it’s not about APC, for those who think it is.

“If it is possible, the country should declare a public holiday so that people can go out there, get their PVCs and get ready to vote on election days.”