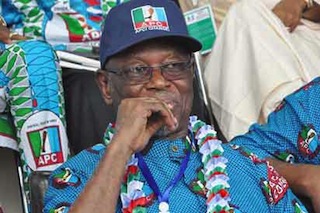 The chairman of the All Progressives Congress, Chief John Odigie-Oyegun has described the postponement of the February elections till March 28 and 11 April, as a ‘major setback for Nigeria’s democracy”.

In a statement after the Independent National Electoral Commission gave the new date, Oyegun said his party would hold an emergency meeting on the issue. But he also appealed to the party supporters to maintain calm.

” All Progressives Congress, APC has just heard over the news media that The Independent National Electoral Commission (INEC) has decided to postpone the elections by six weeks on the strength of a letter by the security chiefs that they cannot provide security for the elections nationwide because of the commitment of its resources to fight insurgency in the north eastern part of the country.

“This is clearly a major setback for Nigerian democracy, and our Party is meeting in emergency session to study its implications and will inform Nigerians of its decisions in the next few days.

“In the meantime though what has happened is highly provocative, I strongly appeal to all Nigerians to remain calm and desist from violence and any activity which will compound this unfortunate development. We must not fall into this obvious trap. Change we must. They can only delay it; No one can stop it.

“I want to assure all Nigerians that the All Progressives Congress will not abandon its commitment to change and will sustain the struggle to establish a new Nigeria.