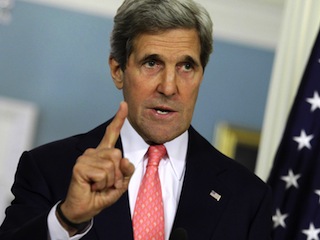 The top US diplomat said Saturday he was “deeply disappointed” by Nigeria’s decision to postpone elections and issued a call for calm.

The six-week delay was announced after security chiefs said the military needed more time to secure areas under the control of Boko Haram, the Islamist extremists who have seized swathes of territory in northeastern Nigeria.

“The United States is deeply disappointed by the decision to postpone Nigeria’s presidential election, which had been scheduled for February 14,” Kerry said in a statement.

“Political interference with the Independent National Electoral Commission is unacceptable, and it is critical that the government not use security concerns as a pretext for impeding the democratic process,” he stressed.

Kerry said the international community “will be watching closely as the Nigerian government prepares for elections on the newly scheduled dates. The United States underscores the importance of ensuring that there are no further delays.”

Since the turn of the year, the militant group has increased the intensity of its campaign, in part to further undermine the democratic process, which it views as un-Islamic.

“As I reaffirmed when I visited Lagos last month, we support a free, transparent, and credible electoral process in Nigeria and renew our calls on all candidates, their supporters, and Nigerian citizens to maintain calm and reject election-related violence,” Kerry added.

The insurgency has killed at least 13,000 people and pushed more than a million from their homes since 2009.