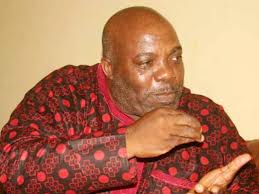 Senior Special Assistant to President Goodluck Jonathan on Public Affairs, Doyin Okupe, did not bargain for what he got on Sunday when he was disgraced at an event which held within his own territory at the Presidential Villa in Abuja, Nigeria’s capital.

He attempted to disparage the presidential candidate of the All Progressives Congress, APC, General Muhammadu Buhari, when he was booed by the guests at the event.

Okupe, known for his scurrilous attacks on APC stalwarts, resorted to saying that Buhari did not go to school and as such Nigerians should not vote for him.

But his attempts fell flat as the guests at the event on national television disagreed and booed him in defence of Buhari.

When the booing became strident and unbearable, Okupe walked out of the venue in shame.