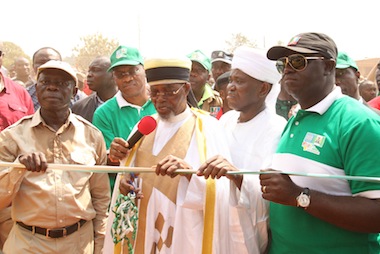 Governor Adams Oshiomhole of Edo state has flagged off a N5.7billion Auchi Erosion project to tackle the menacing gully erosion threatening to consume the community, describing it as a historic intervention that will change the fortune of the kingdom.

Speaking at the flag-off of the World Bank-assisted project on Friday, Oshiomhole said, “We have borrowed N5.7 billion naira to protect this great kingdom of Auchi, to restore hope and to remove the fear and the pain that people suffer when it rains because that is the primary purpose of government. The loan that the bank gave to us is at an interest rate of less than 1 per cent and it was spread so thinly that we pay painlessly. So it takes a sensible government, competent and transparent for people to access this World Bank facility.

“I want to congratulate you for witnessing this historic intervention which will change the fortune of this great kingdom and all those who reside in this kingdom. When men or women who are enthroned into office by God conduct themselves under the guidance of God and ensure that justice and fairness rule, then the people will rejoice because they will witness development.

“I am really excited at this rare privilege that we are here to formally flag off the restoration and the construction of the Auchi erosion project. Different governments in the past have attempted to address this problem. I am told that one contractor that was given the job in the past by some federal interests even have some of his second hand tractors trapped in the valley of this kingdom. When the people of Auchi wanted government to solve the problem, some persons in government were more interested in the name of the kingdom and in the name of this project to pocket tax payers’ money.

“So rather than give the contract on the basis of well-thought-out designs that can be scientifically checked and verified as suitable and proper, they choose one of themselves who knows next to nothing about civil engineering or erosion control so that the money can be taken.

“So when you hear me criticize PDP, it is because this has been their habit. In the name of the unemployed, they will advertise, collect money and in the end people will die. In the name of Auchi erosion, they appropriated money, they took the money and Auchi people were worse off.

“But like I have always said, my task was never to lament the failure of the past but to put hope and to make the point that we still can make tomorrow better if we learn the right lessons from the failures of the past. When I assured His Royal Highness that this will be done, I did so because I know not that we have all the money to do all that we desire to do but because we have the will to do everything that we are sure we need to get done.

“Today, we are here in spite of all the conspiracies from some quarters to deny us access to the ecological funds from which we could have raised even this sum to get this job done. Even when they gave out N2 billion naira each to some state they didn’t to Edo state but I am not lamenting that now. Those they gave the money to have pocketed it, they haven’t launched any programme that we can see but we who didn’t get it.

“I’m comforted that though we may be afflicted with poverty of the pocket, we are relieved by the resourcefulness of the brains. The only poverty that I dread is the poverty of ideas, poverty of commitment and the poverty of will and passion to do what is right. So if we are here today, we are here because we have gathered these other attributes to identify what we needed to do, to identify who we need to approach and how we need to approach them so that today, it can become a reality.

“We want to appreciate the World Bank for the trust and for the confidence but even for not just throwing money at us but for having the passion and commitment to visit and see for themselves the nature of the erosion challenges and what we are trying to do”, he said.

In his remarks, the Nigeria Erosion and Watershed Management Programme (NEWMAP) National Project Director, Mr. Chikelo Nwune said, “Whatever will be done, the challenge is on all of us all to make it work. The money we are going to use to do this project is a loan that will be paid over several periods of years, so it is important for us to be prudent in the management of the project.

“The terrain of Auchi area is something we cannot change. We have done the design and the people who have the expertise and the skills are going to translate it and you will see the drain that will convey the runoff water into the water bodies. Beyond that, the natural environment will be tampered with, some houses will go but thank God the resources are there to create some compensation.

“As development takes place, human beings lifestyle must change, people must generate wealth. As I look around, I saw garbage here and there, if these garbage enter into the drainage, they will distort the normal flow of water, so it is necessary for us to remind ourselves that there are expectations, from the government to pay the contractors, for the contractor to deliver and beyond that, for the maintenance. We all must agree that after the work is done, we are going to maintain it so that it will stand the test of time”, he said.

The Otarru of Auchi, HRH, Aliru Momoh, the Ikelebe III, in his remarks appreciated the Comrade Governor for delivering the good things of life to the people of the state in general and the Auchi Kingdom in particular.

He said, “I have no doubt that what we are seeing here today is something that we have fought for. We demonstrated in 2006, we closed down the expressway and said that Auchi Erosion be declared a disaster.

“The Federal Government did not respond and we ended up with nothing but today, this is being realized through the efforts of Governor Adams Oshiomhole”.

Also speaking, the Commissioner for Environment and Public Utilities, Prince Clem Agba said, “today’s event is a culmination of a series of preparatory activities which took almost five years to accomplish.

“Within this period, Edo State Government contributed an initial N30 million for designs, hosted an Engineering clinic to review the designs, signed the subsidiary agreement with the Federal Ministry of Finance, issued a legal opinion in respect of the project and provided office accommodation for the state project management unit,” he said.