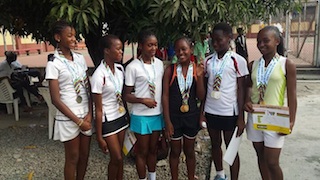 Venus Ubiebi (far left), posing with her friends after winning the bronze medal at the singles event of the Ibile Games in Lagos

The Senior Secondary School 2 student of Unique Breeds College, Ketu, won bronze medals in the singles and doubles event of the annual Championship.

Speaking with P.M.NEWS Tennis Special on Monday morning, an elated Abel Ubiebi, father of the athlete, disclosed that he was really glad that his daughter could get scholarship from her school for her efforts at the Games.

He noted that other schools should endeavour to emulate such gestures as it gives the students the required boost to perform even better in subsequent tournaments.

“Honestly, I was lost for words when I learnt about the new development because it showed how much the school appreciated Venus’s efforts in the tournament.

“I am really grateful to the management of the Unique Breeds College for this initiative. This should also be an avenue other schools can tap into. They should learn to appreciate anyone who does well in his/her chosen field.

“The more they do this, the more encouraged the children will feel and the better their performance on the court. We are most grateful,” the highly-revered coach submitted.

Asked what the next step for his daughter would be, Coach Ubiebi stated that they would continue training really hard because, “she has just only started with her tennis. We have a target which we believe God can help us attain.

“I want Nigerians to watch out for Venus Ubiebi because she will take the local tennis by storm and move from there to the international tennis world, WTA. We are doing a lot in training and with some tournaments as well.”