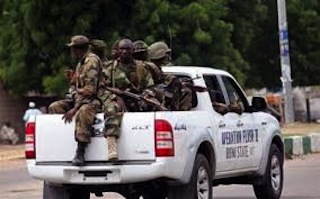 The statement said for three straight days, the private residence of the national leader of the All Progressives Congress (APC) has been under surveillance by battle-ready and helmet-wearing soldiers. “Numbering close to 30 and riding in three patrol vans and an army truck stationed close to the entrance of the gate to Tinubu’s house along Bourdillon Road in Ikoyi, they have become a permanent feature. Their obvious target, Tinubu himself and perhaps the hordes of politicians and visitors that visit his Bourdillon residence.”

“The soldiers were first noticed on Sunday a few minutes to 11:00 pm in an army truck, the statement said, noting that, they stationed about 500 meters away from Tinubu’s gate. “Later they moved close to his gate as if making efforts to enter. The stern looking soldiers were around for hours on Sunday and returned on Monday to continue their surveillance. Monday night about 10.45pm, they returned to the residence in two army vans and were there throughout the night. Some of the soldiers discharged from the van and walked back and forth in front of the house and around the house in what is clearly some casing effort.”

The statement noted that this morning, Tuesday 10 February, two vans from the army were stationed on both sides of the house along Bourdillon road their missions shrouded in secrecy.

But in a swift reaction, Tinubu said he will not be intimidated by this show of strength, intimidation and possible harassment. “I remain resolute in my advocacy and support for the rule of law. Jonathan’s government has through the service chiefs staged a coup against Nigerians and the Constitution and now wants to silence his critics. I will not be muzzled through the barrel of the gun. The guns and bullets they should use to defeat Boko Haram are now being turned against the opposition and innocent Nigerians,” he said.

The statement said: “Tinubu remains emphatically resolute and committed to the path of change in Nigeria and the liberating manifesto of the All Progressives Party, APC. Tinubu is an unrelenting critic of the maladministration of the Jonathan-led PDP government. Tinubu is credited to have played the most pivotal role in the re-building of the Nigerian opposition and the formation of the APC, Nigeria’s most formidable opposition party since independence.”