Lesotho to go ahead with elections despite tension 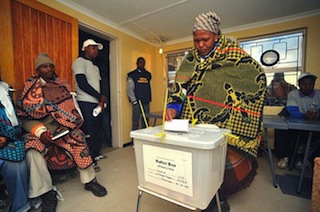 Lesotho will go ahead with early elections as planned at the end of this month despite recent renewed tensions, South Africa’s presidency announced at the end of crisis talks with the kingdom’s premier on Monday.

“The meeting expressed its confidence that the climate for the holding of elections on 28 February remains on course,” President Jacob Zuma’s office said in a statement.

Zuma hosted the Monday talks in his capacity as chairman of the peace and security section of the regional bloc Southern African Development Community (SADC).

The talks were attended by Prime Minister Thomas Thabane and top officials from his troubled coalition government.

Lesotho’s February 28 elections are being held more than two years early in a bid to restore stability following a coup attempt last August in the impoverished country of two million which is surrounded by South Africa.

The failed August 30 putsch exposed friction between the Lesotho military and the police and tensions remain.

A shootout between the army and the prime minister’s bodyguards at a checkpoint in the capital Maseru killed a bystander and injured two of the premier’s bodyguards on February 1.

Lesotho provides some 90 percent of the water to South Africa’s commercial hub, Johannesburg, and most of its major businesses are South African-owned.

Zuma had at the weekend described Lesotho as “a very complex country, small as it is.”