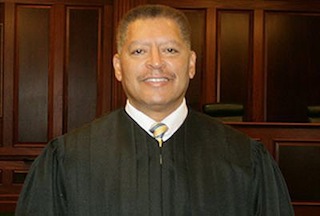 An American judge on Tuesday advised his Nigerian counterparts to act with integrity, expediency and independence in deciding electoral matters at the conclusion of the presidential and parliamentary elections in March and April this year.

James A. Wynn, who serves in the United States Court of Appeals for the Fourth Circuit, spoke with Nigerians, including journalists and members of various civil society organisations, via a Digital Video Conference from North Carolina.

Wynn was joined by three Nigerian judges of the Federal Capital Territory in Abuja, including Justice Ishaq Usman Bello, an anti-corruption Judge and Head of the Criminal Trial Division of the FCT Judiciary.

Wynn, who spoke on the topic “Judiciary’s Responsibility to a Credible Electoral process”, shared with Nigerians some of the experiences judges in the US had confronted in the resolution of certain electoral issues.

When the 2015 general elections are over, Wynn said, Nigerian judges are certainly going to be called upon to decide issues of irregularities, and perhaps even malpractices in the electoral process.

“You in your role as judges and legal practitioners in Nigeria will, no doubt, play a critical role in this year’s elections. Under these circumstances when public confidence in the electoral process wanes, it is essential for judges to act with expediency, and with the utmost integrity and independence when deciding judicial issues,” Wynn told Nigerians at the US Embassy in Abuja and the Consulate in Lagos.

As a third branch of government, he said, “we as judges must strive to ensure that our decisions are the product of impartial deliberations and unbiased judgments, and that such decisions are free from outside influence.”

“Make no mistake about it, the public perception of the judiciary as a fair and independent branch of government is just as important as actual fairness, independence and impartiality of the judiciary,” he said.

He said judges should not only embody impartiality, independence and integrity, “we must also avoid even the appearance of impropriety.”

Citing the Bush versus Gore case that was decided by the American Supreme Court in the 2000 Presidential Election, Wynn said, it is important election matters are decided before 29 May when new elected officers would be assuming their duties.

In his remarks from Abuja, Justice Ishaq Bello said the Nigerian judiciary is up and doing and has already “developed thick skin against any form of interference”.

“As far as independence is concerned, the Nigerian judiciary is up and doing,” Bello said.

He said, the 200 election tribunal judges who have already been chosen by the Chief Judge of Nigeria, were selected based on integrity and are ready for the upcoming elections.

Commenting on corruption and judicial interference, Justice Bello argued that no one is totally insulated from outside pressures but “it depends on the individual judge.”

He called on aggrieved parties to ensure that evidence is before the court.

He said when cases are poorly investigated, there is nothing a judge can do to deliver the desired judgment.