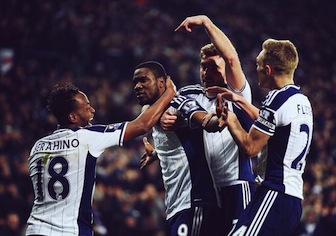 The two strikers were both drafted into the starting XI after coming off the bench in Sunday’s 2-2 draw at Burnley and they repaid manager Tony Pulis’s faith with a pair of second-half goals.

Nigerian striker Ideye, West Brom’s £10 million ($15.2 million, 13.4 million euros) record signing, had scored the equaliser at Burnley and he was rewarded with a place up front alongside Berahino at the Hawthorns.

The home team were the first to threaten, with defender Craig Dawson’s header pawed away by visiting goalkeeper Lukasz Fabianski, who then did well to flick the ball away from the lurking Ideye.

With new captain Darren Fletcher dictating play in midfield, West Brom settled quickly, but fit-again Swansea winger Jefferson Montero gave them a scare when he teed up Bafetimbi Gomis, only for the Frenchman to blaze over.

After a largely event-free first half, West Brom made the breakthrough on the hour.

Ideye saw his initial shot blocked by Swansea captain Ashley Williams, but he pounced on the loose ball and fired it into the bottom left corner to register a second goal in two games.

The former Dynamo Kiev striker then set up Berahino to sweep home from 12 yards in the 74th minute, completing a win that leaves Pulis with eight points from his first five league games since succeeding Alan Irvine.