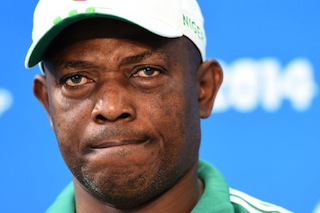 Nigeria Football Federation, NFF, is ready to give erstwhile Chief Coach of the Super Eagles a new contract but the deal will go with some conditions.

The 52-year-old Keshi has worked without a contract since his initial deal ran out after the 2014 World Cup in Brazil.

“We deliberated on Keshi’s contract renewal and have made our recommendations to the NFF board,” announced chairman of the Nigeria Football Federation (NFF) technical committee, Felix Anyansi-Agwu after their meeting in Abuja on Tuesday .

It is understood they have recommended Keshi’s contract be renewed but with clauses that make him answerable to the technical committee.

He will also work with a backroom staff appointed by his employers against his preference for those he worked with previously.

In June, Nigeria will begin the qualifying tournament for the 2017 Africa Cup of Nations.

The African zone qualifiers for the 2018 World Cup in Russia will also begin in October.