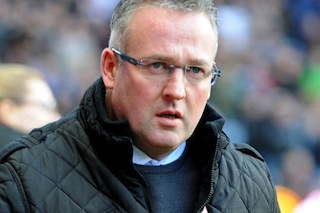 Paul Lambert has been sacked as manager of Aston Villa after a run of 10 games without a win took them into the Premier League relegation zone, the club announced on Wednesday.

Lambert, 45, took over at Villa Park in 2012 and led the Midlands club to 15th-place finishes in his first two seasons, but the former Scotland midfielder had come under pressure from fans following a poor run of recent form.

Villa recently went 11 hours without scoring a Premier League goal and supporters unveiled a banner calling for Lambert to leave during their 2-0 loss at fellow strugglers Hull City on Tuesday.

“The club would also like to place on record its thanks to Paul and take this opportunity to wish him every success in the future,” Villa added.

“The club will announce a new manager in due course. There will be no further comment from the club at this stage.”

The defeat at the KC Stadium saw Villa slip into the Premier League’s bottom three for the first time this season, raising the prospect of a first relegation since the 1986-87 campaign.

“You can’t feel sorry for yourself,” Lambert said after the game. “You’ve got to pick yourself up and go again.”

Villa, European champions in 1982, made a strong start to the season, winning three and drawing one of their first four league fixtures.

Their form saw Lambert awarded a contract extension last September, but his stock plummeted as they won just two of their subsequent 21 matches.

Villa were also knocked out of the League Cup by third-tier Leyton Orient, but they have reached the fifth round of the FA Cup.

Lambert, who won the Champions League as a player with Borussia Dortmund in 1997, joined Villa after three seasons with Norwich City.

Former Tottenham Hotspur manager Tim Sherwood, previously linked with West Brom and QPR, is reported to be a leading contender to succeed Lambert.