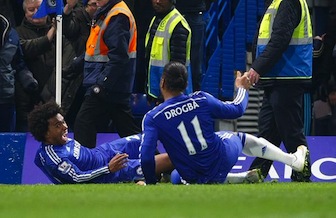 Chelsea left it late as Willian’s 89th-minute winner against Everton on Wednesday secured a 1-0 victory that conserved his side’s seven-point lead in the Premier League title race.

Chelsea also had goalkeeper Petr Cech to thank for two saves to deny Everton striker Romelu Lukaku on a night when second-place Manchester City wrapped up a more comprehensive 4-1 victory at Stoke City.

Everton, who had Gareth Barry sent off, remain 12th.

Chelsea manager Jose Mourinho handed a first start to new signing Juan Cuadrado, who had made his debut in Saturday’s 2-1 win at Aston Villa, while Cesc Fabregas returned from injury on the bench.

Everton, beaten 6-3 at home by the Premier League leaders in August, recalled fit-again goalkeeper Tim Howard for his first appearance of 2015, relegating Joel Robles to the bench.

Nemanja Matic shrugged off two challengers to fire the game’s first shot over the bar.

Cuadrado saw an effort blocked and appealed in vain for a penalty when Steven Naismith flicked the rebound away with his shoulder.

The home side continued to dominate, with Willian curling an effort just over, but there was a chance at the other end for Lukaku that saw Cech stick out a leg to deny the former Chelsea man.

Within seconds Cuadrado had fired across goal and wide, and Howard did well to palm away a header from Loic Remy.

Everton were living dangerously and were relieved that Eden Hazard was unable to make contact right in front of goal and when a swift counter-attack saw Remy fail to hit the target.

Branislav Ivanovic’s blushes were saved by an offside flag after he blasted over from close range, but Lukaku was still trying to prove a point and curled a low drive at Cech, who was preferred to Thibaut Courtois.

Howard was by far the busier goalkeeper, though, and did well to cling on to Ivanovic’s low drive as blue shirts converged. Everton were grateful for the half-time whistle.

Everton replaced Muhamed Besic, who had been booked, with James McCarthy for the second period, which began with Howard saving an Ivanovic header and Seamus Coleman shown a yellow card for impeding Hazard.

Hazard was Chelsea’s main threat and the speedy Belgian saw a near-post effort batted away by Howard.

The pressure was mounting, but Howard was able to save again, this time from the excellent Matic’s free-kick, and the bearded American was soon called into action once more, this time to deny Willian.

But suddenly Cech was the Chelsea hero when Lukaku got on the end of a low ball across the box from Bryan Oviedo.

The home defence were helpless as the forward connected right in front of goal, but somehow Cech was able to get his leg in the way for a second time.

Mourinho responded with a double change, replacing Remy and the lively Cuadrado with Didier Drogba and Fabregas, while opposite number Roberto Martinez sent Darron Gibson and Kevin Mirallas into the fray.

Both the visitors’ newcomers were keen to make an impact, with Gibson seeing a header easily saved before Mirallas fired just over from outside the box.

Matic thought he had finally broken the deadlock in the 86th minute, but it was ruled out because it had deflected in off Ivanovic, who was offside.

Everton were down to 10 men a minute later when Barry, who had been booked in the first half, was shown a second yellow card for a foul on Willian.

Players from both sides squared up to each other in the aftermath, with referee Jonathan Moss missing an apparent headbutt by Ivanovic on McCarthy.

Within seconds of play restarting Willian won the game for Chelsea with a well-struck return of another Howard punch that went through Gibson’s legs and deceived the goalkeeper at his near post.