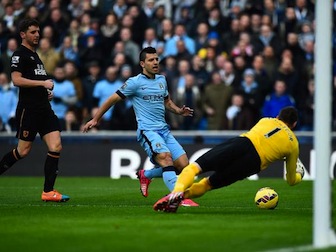 Manchester City showed their defence of the Premier League title isn’t over just yet as Sergio Aguero’s double inspired a 4-1 win at Stoke that kept the champions in touch with leaders Chelsea on Wednesday.

A miserable run of five games without a win in the absence of key midfielder Yaya Toure, on African Cup of Nations duty with the Ivory Coast, had cast doubts over City’s ability to close the gap on Chelsea.

But Aguero’s brace and strikes from James Milner and Samir Nasri gave City their first league win at Stoke in 16 years and kept Manuel Pellegrini’s second-placed side within seven points of Chelsea.

The Britannia Stadium has not been a happy hunting ground for City and they knew almost instantly nothing would come easy as they were subjected to an early onslaught once Aguero had passed up an opportunity to give them the lead.

The Argentina international had gone six games without a goal either side of a month out with a knee injury and again his deadly touch deserted him as he scuffed a shot from David Silva’s perfectly-weighted square pass.

And that was the cue for Stoke to throw everything at the champions as they looked to complete an unlikely double following their win at Eastlands in August.

City goalkeeper Joe Hart just about managed to scramble a Victor Moses shot around the post for a corner which Peter Crouch met with a header that was goalbound until it struck Milner.

City lived dangerously again when Crouch then had the ball in the net but after Hart could only parry another Moses shot into his path, the former England international converted from an offside position.

Moses was stretching City at every opportunity and went close again with another fierce drive that flew just wide after Hart had blocked a Steven Nzonzi shot.

But City finally found some relief in the shape of Aguero who ended his barren run with his 20th goal of the season with just over half an hour gone.

There didn’t look to be too much on when Milner relieved the pressure with a long clearance, but Aguero’s determination saw him beat Marc Muniesa to the bouncing ball and from there he only had eyes for goal.

Running at an exposed Stoke defence, the striker went outside Phil Bardsley wide before shooting low across goalkeeper Asmir Begovic and into the far corner.

But if City thought that would give them a measure of control they were wrong as within four minutes Stoke were level, this time Crouch timing his run perfectly to meet a Marko Arnautovic cross with a downward header which gave Hart no chance to claim his seventh goal of the season.

Still the excitement of the half wasn’t over as Aguero thought he had put City back in front in stoppage time but after meeting a Silva cross with an initial touch and then a close-range header, he was judged to have helped the ball over the line with his hand and instead of awarding the goal, as he looked to have done at first, referee Lee Mason instead booked City’s leading scorer.

Milner and Aguero were the key men in the second half as City finally put distance between themselves and Stoke.

Milner headed City into the lead from a Nasri cross 10 minutes after the break as he scored for the second game in a row to double his Premier League tally for the season.

Aguero then scored from the penalty spot after Silva had been pulled back by Geoff Cameron and with Stoke a beaten side, Nasri made the victory even more emphatic, cutting in to steer a delightful shot past Begovic from 20 yards to show that City won’t give up their crown without a fight.