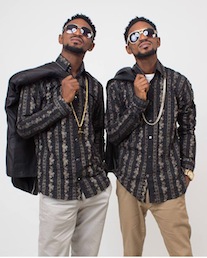 The Jolar twins started the year on a high note with Love Things following the release of their maiden single late last year.

The video produced by Sean Kezey and Young Blaze has been enjoying air play in most prominent media platforms across the Nigeria. The high quality video features comedian, Omo Baba and Labi Yori, a versatile entertainment presenter and On-Air-Personality, OAP.

Unlike others who go into music for the glamour and fame, the Lagos-born twin seek to impact lives and be good role models to the young people through their music.

The duo who interestingly bear the same first names with the award-winning twins P-Square; Peter and Paul have over the years worked with some veterans in the entertainment industry. These include Gbenga Adeyinka, Olu Maintain, Rasky Monu, No more loss, Shaeyman, Soul E, Derenle Edun, DJ Bombastics, among others.

Speaking with PM News Entertainment, DA PEEZ applauds the progress and revolution in the Nigerian music industry. “Nigerian music industry has evolved to be one of the largest employers of labour in the country, most especially for the young people. Unlike in the past, Nigerian musicians now collaborate and share stage with their foreign counterparts. This is a good omen for the industry”

They however, lament the discrimination and lack of support being experienced by up-coming artistes in the industry. “Nigeria is blessed with talents. These up-coming artistes only need the right people and platforms to showcase what they have in them but these are not easy to come by. We had and still face similar challenge too but we overcame by paying the price; self-determination”

The Lagos-born twin who also runs an entertainment outfit hails from Edo State. Their styles of music include R&B, Hip Hop, Raggae and Afro Pop.