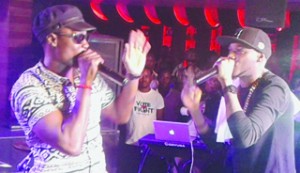 •Sound Sultan and 2face performing at the Industry Nite

In a bid to drive home the message of non violence in the forthcoming elections, music star 2Face Idibia alongside some of the biggest names in the entertainment industry took the #Votenotfight campaign to weekly entertainment event- Industry Nite.

The event which took place on Wednesday, 11 February at the Spice Route, Victoria Island, afforded the artiste the avenue to properly sensitise his fans and music lovers on what the vote not fight campaign is all about and the need to shun election violence.

Speaking on the essence of the campaign 2Face said: “The idea behind#Votenotfight is to encourage the youths to shun electoral violence and let their PVCs do the talking. The only way we can have a better society is if we all come out en masse to vote and hold our leaders responsible for their actions”.

The evening also witnessed 2Face perform songs like “One Love”,  ”Let me love you”  amongst others while rounding off the night with “Bush meat” alongside Sound Sultan.