50,000 Eligible Voters To Be Disenfranchised In Edo - INEC 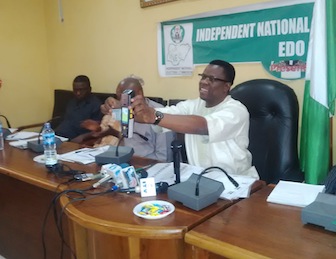 Barr. Igini demonstrating how to use a card reader

Close to 50, 000 registered voters in Edo state would be disenfranchised by the Independent National Electoral Commission (INEC), during the coming general elections rescheduled to hold on 28 March and 11 April, 2015.

The state Resident Electoral Commissioner, Barr. Mike Igini, made this assertion on Friday, during a meeting with stakeholders held at the state office of the Commission.

He disclosed that a total of 49, 515 persons engaged in multiple registration during Permanent Voter’s Cards ‎registration exercise in the state, adding that, neither would such persons be issued with PVCs nor would they have access to cast their votes to elect candidates of their choice.

The state REC gave an instance of a particular person who registered twice at different registration points, wearing different colours of dress and even shaved his head for the second registration.

‎Barrister Igini announced that the state office of INEC has distributed a total of 1, 087, 203 PVCs out of the over 1.7 million registered voters across the three senatorial districts of the state‎, while 449, 431 PVCs were yet to be collected.

He disclosed that over 900, 000 adhoc staff would be engaged to assist the 13, 000 staff strength of the Commission nationwide. Of this number, 15, 571 have been engaged and already trained as adhoc staff for the state.

The REC also announced that the state office of INEC has taken delivery of 3, 675 card readers already configured and would be deployed to the 2, 627 polling units in the state.

“Election is a reflection of the society. If the process is right, the outcome of the election will be acceptable to t‎he people. We are committed to conducting one of the best elections ever in the history of Nigeria,” Igini said.

He reiterated the Commission’s preparedness to “return power to people to whom power belongs, through the conduct of free, fair, credible and acceptable election.”

‎Rather than spending time on how to rig elections, Barrister Igini told politicians to shop for good candidates to win elections, saying the era if relying on ‎rigging was over, just as he urged them to mobilise their supporters to obtain their PVCs and put them to good use by coming out en-masse for candidates of their choice as the Commission has blocked all avenues for rigging.

“No room for thumb printing and snatching of ballot boxes as the card readers will check all that. Card reader is capable of retiring many people from politics permanently,” he warned.

‎Barrister Igini took time to demonstrate the use and function of the PVC reader (which he called the game changer), to the leaders of political parties, civil society organisations and journalists present at the stakeholders meeting.