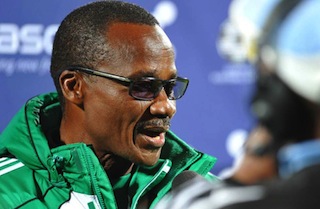 Former title-holders Enyimba of Nigeria will tread warily when the 2015 CAF Champions League kicks off this weekend even though rivals Buffles Borgou of Benin are weak and inexperienced.

The 2003 and 2004 African champions from south-east city Aba were expected to go far in the competition last year.

But after scraping past Togolese Anges Notse, they lost at home to Malians Real Bamako and a second-leg recovery could not prevent a shock, early exit.

Coach Kadiri Ikhana, who also coached the 2003 Champions League-winning team, believes that disastrous campaign is behind the team popularly known as the Peoples’ Elephant.

“I am confident that we will do better than last year and progress very far in the Champions League this time,” he assured reporters.

“However, we must be careful not to underrate Buffles. The key is to prepare adequately so that we are not taken by surprise.

“There are no small teams in the CAF club competitions and we must treat our opponents seriously in order to achieve a good result.

“It is a good tie for us because of the limited travel involved,” said Ikhana, referring to Benin and Nigeria being west African neighbours.

Enyimba prepared for Africa by playing in a six-team domestic tournament as the national league has not kicked off.

As they seek a commanding first-leg lead over Champions League debutants Buffles, Enyimba expect goals from striker Mfon Udoh, scorer of a record 23 in the league last season.

Kano Pillars, the other half of a twin-pronged Nigerian challenge for the biggest African Football Confederation (CAF) club prize, tackle Al-Malakia in South Sudan.

The northern club are guided by Okey Emordi, coach of Enyimba when they retained the Champions League in 2004.

Pillars made an even earlier exit last year than Enyimba, losing a preliminary tie against eventual runners-up V Club from the Democratic Republic of Congo.

Malakia are a much weaker side than V Club, though, and it would be a shock if a Kano team bolstered by 10 close-season signings fail to advance.

It is 20 years since Orlando Pirates became the only South African winners of the competition and Kaizer Chiefs and Mamelodi Sundowns believe they can go all the way this year.

“We have a team that can compete against anybody in the world,” boasted Chiefs official Bobby Motaung ahead of a home game against Township Rollers from Botswana.

Sundowns are away to Saint Michel United in the Seychelles and coach Pitso Mosimane has high hopes of bettering second place in 2001 behind Egyptians Al-Ahly.