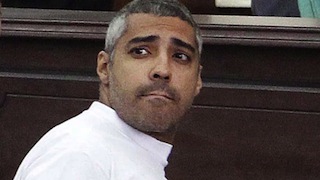 An Egyptian court ordered the release of two jailed Al-Jazeera journalists Thursday pending retrial, after they spent more than 400 days in prison in a case that sparked worldwide outrage.

Mohamed Fahmy, who is Canadian and whose family hoped he would be deported, must pay 250,000 Egyptian pounds ($33,000) bail. His colleague, Egyptian Baher Mohamed, was freed without bail.

The two must appear in court again on February 23, for a retrial ordered last month when a court said there was insufficient evidence to support their original conviction.

The families of Fahmy and Mohamed wept and embraced as the decision was handed down, freeing the pair who had entered the packed courtroom dressed in white prison uniforms.

Together with their Australian colleague Peter Greste, who was deported earlier this month, the three were accused of supporting the blacklisted Muslim Brotherhood and jailed for between seven and 10 years each.

Greste, now home in Australia, said he was overjoyed that his colleagues had been released, but that with a retrial pending, it was too soon to celebrate.

“The trial is ongoing, and nobody has yet been acquitted,” he said in comments carried by Australian Associated Press news agency.

“I’m looking forward to the day when the court declares all of us innocent of the charges. Then the party will really begin.”

A message posted on Mohamed’s Twitter feed simply said: “I AM FREE”.

Heather Allan, head of newsgathering at Al-Jazeera English, said: “We are very grateful. This is a great, great day for us and we just hope that… the whole thing is thrown out.”

Fahmy’s fiancee Marwa Omara tearfully hugged those around her as the pair’s release was announced while his mother, Wafaa Bassiouny, said her happiness will only be complete when he is acquitted.

Bassiouny also voiced concern about raising the bail. “It is a huge amount, we will do miracles to find it”.

Baher Mohamed’s wife, Jihan Rashid, also broke out in tears. “Half of the nightmare is over. Now I am waiting for his acquittal.”

The case has been a major source of embarrassment for President Abdel Fattah al-Sisi as he seeks to shore up international support following a widely condemned crackdown on the opposition.

Fahmy, a dual national, had renounced his Egyptian citizenship to benefit from a law that allows the deportation of foreign defendants and which led to Greste’s release.

On Thursday’s first session of their retrial, Fahmy was allowed out of the caged dock to address the judge.

“I didn’t ask to drop my nationality,” he said, his arm in a blue sling from an accident he suffered before his arrest.

“A security official visited me and asked I drop my citizenship because the state wanted to get this case done with, it had become a nightmare,” he said before unfurling a large Egyptian flag.

Greste was on the judge’s roll call of defendants at the start of the trial.

“He’s not here sir,” responded a police officer when the judge called out his name.

The three employees of Qatar-based Al-Jazeera English were arrested in December 2013 and charged with spreading false news about Egypt and supporting the Muslim Brotherhood.

Their arrests and continued detention sparked widespread condemnation and calls for their release led by Washington and the United Nations.

The journalists’ initial trial came against the backdrop of strained ties between Egypt and Qatar, which supported ousted president Mohamed Morsi.

The Islamist leader was toppled by then army chief Sisi in July 2013, before Sisi was himself elected president.

The journalists were among 20 defendants initially tried by the lower court. Of the rest, 12 were Egyptians found guilty of belonging to a “terrorist organisation”.

Two defendants were acquitted, while the other three — also foreigners — were convicted in absentia.

Sisi passed a law by decree last year allowing foreigners to be deported to their home countries to stand trial or serve out their sentences.

Before the start of the retrial, Fahmy’s fiancee said she was disappointed that — unlike Greste — he had not yet benefited from the new law.

“We had assurances from the Canadian government and Egyptian officials that Mohamed was supposed to be out last Tuesday,” Omara told AFP. “I quit my job and packed my bags.”

While Fahmy may still be deported, an acquittal is the only hope for Mohamed as he has no other nationality.

His wife said the family is “paying the price for being Egyptian”.

Sisi’s office has said the president will not consider a pardon before the courts have finished their work.