Nigeria Political Parties Most Corrupt In The World - Transparency International 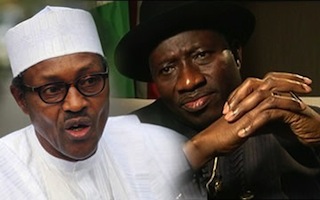 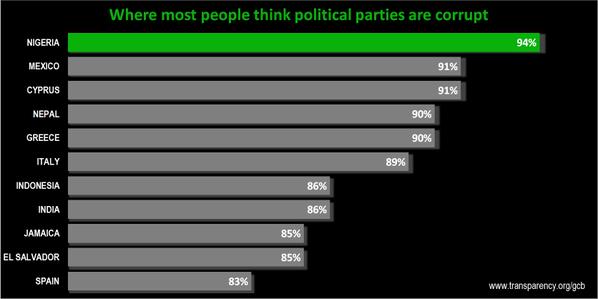 Transparency International (TI), a global coalition fighting against corruption has stated that Nigeria’s political parties are the most corrupt in the world. The assertion was made in a graph that was published on its Twitter account.

On the graph, Nigeria is followed by Mexico and Cyprus both with 91 per cent. Nepal and Greece are placed third with 90 per cent each while Italy is fourth with 89 per cent.

In Africa, only Nigeria’s political parties ranked amongst the top 11.

Meanwhile, TI is concerned that the delay in elections in Nigeria threatens the people’s right to vote and undermines democracy in the country and calls on the government to ensure not only safety for voters at the polls but that they go ahead without more delays.

The government called on the Independent Nigerian Electoral Commission (INEC) to postpone the elections, claiming that the army was not in a position to guarantee security in the face of insurgents in the north east. INEC has set a new date of 28 March.

“Candidates for all parties have been successfully campaigning in some of the regions where insurgents are known to operate. Clearly the safety of Nigerians comes first and foremost but the government should also ensure that elections are held on time, are transparent and are free from fraud,” said José Ugaz, chair of Transparency International.

Under the Nigerian constitution, the current term of government expires on 29 May and elections must happen at least one month prior to this date. The government must commit to this timetable.

It is unclear whether a six weeks’ delay will help the Nigerian army combat the threat from extremist groups such as Boko Haram, which it has been trying to stop for several years. It is imperative that any delay in the election is clearly justified to avert suspicion that the government is simply seeking to hold on to power.

“The government must also ensure that there is no political intimidation and no arrests during the run up to the polls that would trigger violence. Most of eligible voters now have their new election cards, which will make attempts to rig the voting much harder than in the past,” said Ugaz.