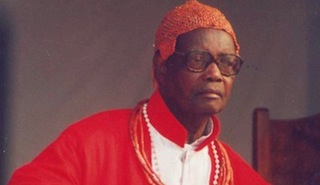 Oba Erediauwa of Benin: wants politicians to stop using his name and office to endorse candidates

The Benin Traditional Council has dispelled rumour of the death of the Benin Monarch, Oba Erediauwa.‎

Rumour of the death of the revered Monarch had gone viral on the internet on Friday morning but it has been doused by the Council.

P. M. News also recalls that the rumour had also gained ground, following the inability of the Oba to personally receive the presidential candidates of the All Progressives Congress (APC), General Muhammadu Buhari (rtd) and President Goodluck Jonathan of the Peoples Democratic Party (PDP), when they visited his palace on 29 January and 4 February respectively.‎

Secretary to the Council, Mr. Frank Irabor, described the purported death of the revered Monarch as mere speculation, which he said had been on for over six months.

He explained that it was the responsibility of the Council to issue a formal statement, if such a development had actually occurred.

“If there is anything like that, there is usually a statement from the palace or from the Benin Traditional Council,” he said.

Irabor who however failed to be specific on the health status of the foremost traditional ruler, pointed out that “the fact that he has not been coming out, even when the President came last week, does not mean that there is anything like that‎.” ‎