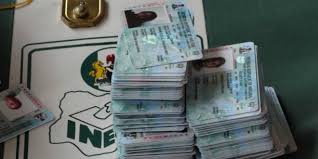 This was revealed by the Public Relations Officer, PRO of the Independent National Electoral Commission, INEC, Ogun state, Mr Roland Dansu in a release today which was made available to PM News in Abeokuta.

Dansu said the state has received over a million voters cards and is still expecting more cards while assuring that every eligible voters will definitely obtain their voters cards before the expiration date of March 8.

“So far, we have received total number of 1,330,240 Permanent Voters’ Cards and more are still coming in. For those who are yet to receive their cards, they should not allay any fear as every eligible voters in the state will be given their cards.

“Those who have missed their Temporary Voters’ Cards, TVC’s will also get theirs in as much their names can be found in the register book of the Commission,” Dansu said.

It would be recalled that the Commission had on Thursday directed that about 12 local government areas in the state should from today be going to their ward headquarters to pick their cards as they had just take delivery of the PVC’s from their headquarters in Abuja.