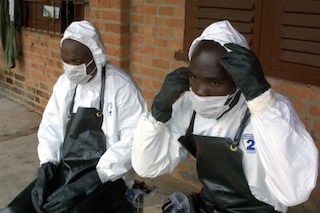 Sierra Leone placed hundreds of homes in the capital under Ebola quarantine Friday, in a huge blow for its recovery less than a month after it lifted all restrictions on movement.

The government said 700 properties had been locked down in Aberdeen, a fishing and tourist district of Freetown, after the death of a fisherman who tested positive for the deadly tropical virus.

“We are on top of the situation and people should not panic,” said Obi Sesay of the government’s National Ebola Response Centre, adding that a special control centre had been set up to deal with the incident.

He told reporters Aberdeen had been “flooded” with surveillance officers and contact tracers to ensure the death didn’t turn into a serious outbreak.

The west African nation of six million has seen almost 11,000 cases and 3,363 deaths during the epidemic which has raged in west Africa for more than a year.

President Ernest Bai Koroma had pointed to a “steady downward trend” in new cases on January 23, lifting country-wide quarantines affecting half the population and declaring that “victory is in sight”.

But optimism gave way to fresh alarm on Wednesday as the World Health Organization (WHO) reported the number of new cases rising across Sierra Leone and neighbouring Guinea for the second week running.

Transmission remains “widespread” in Sierra Leone, which reported 76 new confirmed cases in the week to February 8, according to the WHO.

Freetown mayor Bode Gibson, who visited Aberdeen, told reporters he was “shocked and disappointed” as the case had shattered expectations that the city was approaching the milestone of zero new cases in its weekly count.

“The lifting of the free movement ban was to allow residents to resume trade, not for them to become complacent and behave irresponsibly to increase the spread of the disease,” he said.

Arouna Taylor, a resident of Aberdeen, said canoes from Ebola hotspots like Port Loko further up the coast were docking in the area and bringing the virus with them.

“Boats are suspected to be bringing sick people at night for treatment in the capital, so the development has not come as a surprise,” he told AFP.

Ebola, one of the deadliest viruses known to man, is spread through direct contact with the bodily fluids of an infected person showing symptoms such as fever or vomiting.

Some 9,250 people have died from the epidemic, the WHO said on Friday, although it has admitted that it is impossible to give a precise number as the outcomes of some cases remain unknown.

In the week up to February 8 a total of 144 new confirmed cases were registered across the three hardest hit countries, compared to 124 the previous week.

“The spike in cases in Guinea and continued widespread transmission in Sierra Leone underline the considerable challenges that must still be overcome to get to zero cases,” the WHO said in its latest report.

The news has been more encouraging in Liberia, which saw the most deaths at the peak of the epidemic in September and October but registered just three new confirmed cases in the week to February 8.

The Liberian government has announced it will reopen schools next week, after a six-month closure to slow the spread of the epidemic, while Sierra Leone plans to do so at the end of March.

More than 1.3 million children have already returned to classes in Guinea since schools reopened on January 19, according to UNICEF.

“In Guinea, where nearly all of the country’s more than 12,000 schools are now open, school attendance is at 85 percent of pre-Ebola attendance,” the UN agency said in a statement citing government data and its own findings.

UNICEF has been at the forefront of introducing safety measures to combat the spread of the virus, including children having their temperatures taken and washing their hands before going into classrooms.

Manuel Fontaine, its regional director for west and central Africa, said Liberia’s schools were expected to reopen gradually and that it could be “up to a month before the majority of students are back”.

“Throughout that period education authorities will be working to ensure that conditions are as safe as possible,” he added.

The restart comes as the United States begins to withdraw a west African Ebola military mission, based mainly in Liberia, which peaked at 2,800 troops, leaving no more than 100 soldiers in the region by the end of April.

President Barack Obama said on Wednesday the mission would give way to a civilian-led drive to “extinguish” the deadly virus, as he ordered home American troops.