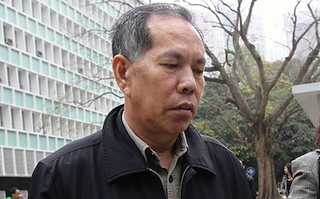 A Hong Kong boat captain was on Saturday found guilty of the manslaughter of 39 people in a 2012 ferry collision, the city’s worst maritime disaster in nearly four decades.

Sea Smooth skipper Lai Sai-ming, 56, was also convicted of one count of endangering safety of others at sea by a Hong Kong court over the accident between his high-speed ferry and a pleasure boat near Lamma Island.

Lai looked solemn as he heard the “guilty” verdicts for all charges against him read out in court, which was packed with reporters. The nine member jury deliberated that Lai was guilty on all manslaughter charges with a majority of seven-to-two.

“Mr Lai will be sentenced on Monday,” his lawyer Audrey Campbell-Moffat told press outside the city’s high court, refusing to comment on the judgement.

Chow Chi-wai, 58, who was steering the Lamma IV pleasure boat when it crashed with more than 120 people on board on October 1, 2012, was acquitted of all 39 charges of manslaughter.

However, he was also found guilty of one count of endangering the safety of others at sea, which carries a maximum sentence of HK$200,000 ($25,787) and four years’ imprisonment.

Chow looked calm as the verdicts of all charges against him were read out in court, with all 39 manslaughter charges given a “not guilty” verdict with a majority of eight-to-one jurors.

Chow’s lawyer, Gerard McCoy, did not comment on the verdict.

The pair had each pleaded not guilty to 39 counts each of manslaughter, for which they faced life in prison.

The jury deliberated for almost four days before coming to a decision on Saturday afternoon. Before the verdicts were read out, which followed 60 days of court hearings, deputy High Court judge Brian Keith called for the courtroom to remain still, saying “these are moments of high tension”.

The pleasure boat was filled with staff from a Hong Kong electricity provider and their families who were going to watch a holiday fireworks display when the collision occurred.

Scores of people were thrown into the sea when the Lamma’s left rear side was torn open by the impact. Others were trapped inside as the boat sank in just two minutes, leaving only its bow protruding from the water.

The fatal accident raised questions over safety in the waters of Hong Kong — one of the world’s busiest ports — after an independent commission found a “litany of errors” had contributed to the disaster.

Victims could have had vital extra minutes to escape if the Lamma IV had been equipped with a watertight door, while several were actually left trapped when seats fell on top of them, the inquiry found.

The boat also had no children’s life jackets onboard when it sank, claiming the lives of eight youngsters.

It was the deadliest maritime accident in the territory since 1971, when a Hong Kong-Macau ferry sank during a typhoon, leaving 88 people dead.

Several other incidents since — including two high-speed ferry accidents that injured scores of passengers and the grounding of a large container ship — have worried those who cross Hong Kong’s waters.

New ports in the nearby Chinese trading hub of the Pearl River Delta have driven a surge in maritime traffic in the island’s ports, with vessel arrivals almost doubling between 1990 and 2013 to some 200,000 a year.