Madrid down Deportivo to ease pain of derby thrashing 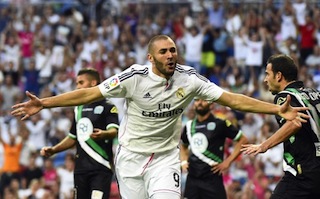 Real Madrid bounced back from their 4-0 derby humiliation by Atletico Madrid last weekend with a 2-0 victory over Deportivo la Coruna to move four points clear at the top of La Liga on Saturday.

The hosts started nervously but could have been well in front at the break as Cristiano Ronaldo and Gareth Bale both struck the bar before Isco’s curling effort opened the scoring.

Deportivo had their chances to level early in the second-half with Celso Borges hitting the post, but Karim Benzema put the result beyond any doubt with Madrid’s second 17 minutes from time.

Barcelona can move back to within a point of the leaders when they host Levante on Sunday.

“It wasn’t an easy game. We only played well in parts and we had difficulties,” admitted Madrid boss Carlo Ancelotti.

“It was a difficult week and we have come out of it with a victory, which is good.

“The team was a bit worried at the start, but in the end it went well.”

With the European champions still plagued by injuries, Ancelotti made just three changes to the side that started against Atletico.

However, Real made another slow start as Iker Casillas blocked a shot from Isaac Cuenca before the former Barcelona winger fired just over after he had been gifted possession by Bale.

Madrid slowly began to take control as the first-half wore on and Ronaldo nearly answered his critics, for hosting his 30th birthday party hours after the Atletico defeat, in style with a dipping effort that struck the underside of the bar.

Bale then did likewise as his thunderous strike on his favoured left foot also came back off the woodwork with Fabricio in the Depor goal beaten.

Benzema saw a deflected effort from Bale’s clever cut-back fly just wide as the pressure mounted, and it finally told on 23 minutes when Isco collected Alvaro Arbeloa’s cross and curled the ball inside the far post for his fifth goal of the season.

Ronaldo’s frustration in front of goal continued when he headed over from another purposeful Bale run and cross just before the break.

However, Ancelotti’s men were very fortunate not to be pegged back at the start of the second period when Costa Rican international Celso Borges volleyed off the post and Casillas came to his side’s rescue again moments later to parry Oriol Riera’s header to safety.

Brazilian midfielder Lucas Silva made his Madrid debut when he replaced Asier Illarramendi 20 minutes from time as Ancelotti looked to make the game safe.

And the Italian could finally relax three minutes later when Ronaldo poked the ball through for Benzema to chip past the onrushing Fabricio.

Earlier, Sevilla leapfrogged Valencia to move into fourth with a comfortable 3-0 win over Cordoba.

Grzegorz Krychowiak and Carlos Bacca put the hosts in the driving seat in the first-half before both sides were reduced to 10 men as firstly Patrick Ekeng and then Krychowiak were shown straight red cards.

Vicente Iborra rounded off the scoring to move the Andalusians a point ahead of Valencia, who host Getafe on Sunday.