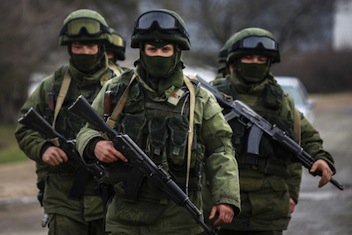 About 100 South African retired military men are ‘actively’ involved in the Nigerian offensive against Boko Haram insurgents in the north east of the country, reports said.

The problem however is that they may not be here legally: they are mercenaries as the country’s defence minister, Nosiviwe Mapisa-Nqakula, has said they should be arrested on their return to the country.

TimesLive.co.za quoted the minister saying: “There are consequences when somebody leaves the country and provides any form of military assistance that is not part of the government’s deployment.”

Mapisa-Nqakula added that the police and prosecuting authority should make examples of the group by charging them under the regulation on Foreign Military Assistance Act.

She also said no South African National Defence Force member was deployed to Nigeria and her country had not received an official request for assistance or weapons.

According to a South African daily newspaper, Beeld, Nigeria, using back channels requested for the ‘mercenaries’ who had been involved in conflicts in Angola, Liberia and Sierra Leone. This illegal approach revives memories of the seizure from Nigeria of $15million cash by South African authorities last year.

The money was meant for the purchase of arms from the open market, instead of the official channel, to fight the Boko Haram insurgency.

The first tranche of $9.3 million cash was confiscated from two Nigerians and an Israeli who flew into South Africa in a jet owned by Pastor Ayo Oritsejafor, an ally of President Jonathan.

The South African Act of Military Assistance Abroad prevents its citizens from participating in wars in other countries, unless they are acting under the authority of the government in Pretoria.

Some of the South Africans are involved in training Nigerian air force pilots and carrying out air strikes against the insurgents position. They are also involved with ground troops, the Weekly Trust reported today, quoting Nigerian military sources.

Corroborating, another security source confided that it is true South African pilots have trained and are still training Nigerian pilots who have so far recorded victories in recent operations in Borno, Yobe and Adamawa states after they carried air raids in Boko Haram hideouts.

“Nigeria has recently procured modern military hardware, including fighter jets and armoured vehicles. But some of the equipments are so sophisticated that both our ground troops and the Air Force cannot operate them without substantial training, which will take some time.”

The source added: “This is basically what made the deployment of the South African experts inevitable, in view of the fact that Nigeria was running out of time and there was the urgent need to substantially address the Boko Haram problem. The top military hierarchy and the Federal Government are trying to revamp our image which is at a record low, especially going by unprecedented breakthroughs recorded by troops from neighbouring countries.”

The newspaper said with the technical support of the South African pilots, the NAF successfully shelled some Boko Haram enclaves around Gulani and Gujba in Yobe State, the Damboa general area, including Alagarno, fringes of the notorious Sambisa Forest as well as parts of Maiduguri, Mafa, Dikwa in Borno State and around Michika in Adamawa State.

“The planes and the helicopters are ours, but South Africans are giving support and the ground troops normally complete operations,” another source disclosed.

The Weekly Trust also reported that military experts, mostly from Eastern Europe, are among other foreign specialists assisting Nigerian troops.

Spokesman for the Defence Headquarters, Major General Chris Olukolade has justified the what amounts to outsourcing of the Boko Haram war: “It is well known that terrorism being an international and trans/cross border menace calls for the involvement of all well meaning countries all over the world.”