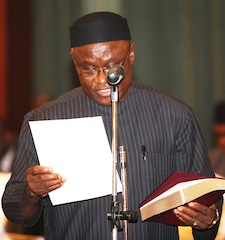 A former Managing Director of Nigeria Breweries Plc and immediate past Chairman of the National Population Commission, Festus Odimegwu, has written a lengthy article endorsing the presidential candidate of the All Progressives Congress, Muhammadu Buhari, and explaining why he is the best man for the nation’s top job as Nigeria grapples with political, security and economic challenges.

Mr. Odimegwu was an appointee of President Goodluck Jonathan after he helped rally the organised private sector to support the enthronement of the Umaru Yar’Adua presidency in which Mr. Jonathan served as vice president.

He remained close to Mr. Jonathan, who appointed him chairman of the National Population Commission. He however left the position in controversial circumstances after he made comments considered critical of a section of the country.

He has kept a distance from the Presidency and the administration ever since.

In his endorsement of Mr. Buhari Saturday, Mr. Odimegwu said, “Countries without the likes of Buhari in power ultimately perishes. There are really no other options to greatness than through great leaders. Buhari has the qualities. And he has a date with destiny in the Nigerian presidency from 2015 – 2023. May God give him the right vision and guide him.”