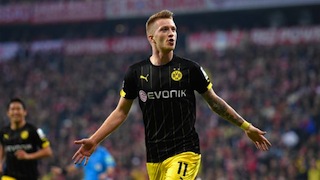 Germany star Marco Reus scored a goal to help Borussia Dortmund move out of the relegation zone with a 4-2 victory over Mainz in Bundesliga action on Friday, the team’s first home win of 2015.

Reus ended weeks of transfer speculation, both at home and abroad, by this week signing a contract extension until 2019, a massive boost for Dortmund in their battle to avoid a first relegation since 1972.

Mainz took a first-minute lead through a long-range lob by Colombian Elkin Soto. Dortmund responded with two sharp goals 10 minutes into the second half, first Neven Subotic with the equaliser and then Reus grabbing the lead after rounding the goalkeeper.

That was short-lived, however, as Yunus Malli drew Mainz level just a minute later.

But Dortmund secured the invaluable win with goals from Pierre-Emerick Aubameyang and Nuri Sahin.

Jurgen Klopp’s side now face a trip to current bottom club Stuttgart next week before minds turn to the Champions League last-16 game away against Juventus on February 24.