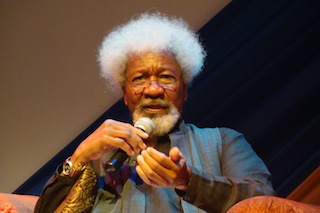 Nobel laureate, Professor Wole Soyinka, has urged President Goodluck Jonathan to lift the military siege on Nigeria’s opposition party leaders following accusations that the federal government is using the military and police to threaten the opposition.

Soyinka who stated categorically that he does not support violence of any kind condemned the stoning of Jonathan’s convoy after a presidential campaign rally in Yola, Adamawa state.

“For the avoidance of all doubt, let it be clearly stated that I am against political violence from any direction and for whatever reason. I especially deplore the stoning of President Jonathan’s campaign convoy. I go even further: I caution those who were responsible that if the assigned protection corps for this nation’s president overreact and respond with bullets, no one should scream violation of their fundamental human rights,” Soyinka said in a statement issued on Saturday.

“Stoning a president is violation of his human rights and, in a time of national tension such as the present, extremely dangerous. Intending suicides are advised to find other, and legitimate means of assuaging their frustrations. The same goes for every level of campaign convoy, visitation, or gathering – be they at governorship, local government, senatorial or whatever level.”

He then cautioned uniformed men against playing partisan politics. “So as not to miss the point, let me also remind impetuous slingshot Davids that Goliath Mbu is the latest kid in town, fresh from his triumph in ‘taming’ governors all over the nation, and reveling in his new elevation for jobs well done.”

“A political jobber by instinct though a clamberer through the police profession, he has wasted no time instructing his men to return violence for violence, fire for fire. He has been displaying his new attire and pips all over the place, demanding to be noticed – as if his facial snarl is not already plastered over the pages of media annals of police infamy, reminiscent of the good old days of one Inspector-General Adewusi, who would appear on television dripping with gas-cannisters and grenades, with a detachment of Kill-and-Go:
“You see those men. The’re not called Kill-and-Go for nothing. They are trained to kill. They only hear the command ‘Go’, but never the order – Stop.”

He recalled that: “Adewusi was Impunity dressed large in police uniform. He mired himself in direct politics – no subterfuge, no subtlety, no inhibitions. He virtually told the electorate which candidate to support – all others were public enemy.”

“He attended meetings of the political caucus of the ruling party and laid down the line. It is clear that AIG Mbu has emerged from the same mould. Is history about to repeat itself in microcosm? Adewusi was sacked by the Buhari coup and vanished from the police political rostrum. One thing about coups however – the supporting cast of anti-democratic villainy always go scot-free.”

“Remind me, o historians – is my memory faulty, or was it not publicly announced that he was retired with his full entitlements? And a few days later, that he had indeed collected all retirement emoluments – at unprecedented speed. By contrast, his victims went on to spend years in prison,” he said.

“This warped apportionment of deserving it must be that drives such officials to treasonable conduct under democracies. If the trend changes, and even the police are made to account for abuses of office, abuses of the collective rights of citizens, then perhaps we might see the end of arrogant partisanship in the performance of police duties.”

“We preach non-violence, but preach this across the board. The electorate must refrain from violence, so must the state and its agencies. Electoral rights have to do with freedom to associate, freedom to express, and freedom to move. This it is that makes it morally wrong to stone a presidential convoy.”

“Unjustifiable, and reprehensible. But what we must learn to insist upon, and defend with our last breath if need be is that the same freedom of movement must be accessible – and protected – to all, as basic right. When a soldier denies an elected official freedom of movement to travel and lend strategic, mobilizing, or simply moral support to contestants of his own party, and is STOPPED, and compelled to turn back – is this some new form of pacific rule that bears no relationship whatsoever to violence? For those with short memories, I am speaking of the travesty of democratic order that took place in Ekiti where a sitting governor and his convoy were stopped, threatened with guns and prevented from exercising their civil rights. Here, just to refresh memories, are my words of warning over that event:  “Where governance has degenerated to such a level that any individual, on account of his uniform, can stop an elected representative of the people, in this case a governor, from going about his legitimate duties or exercising his basic, elementary right as a citizen – as happened during the recent Ekiti elections – we do not need to guess what happens in a situation that calls for general mobilization.”

He noted that: “The same military are now menacing the residences of prominent political figures who happen to be in opposition to the government. Neither ever asked for police protection. One, a governor, has made no complaint of a breakdown of law and order, the other has not let out an SOS for rescue at the hands of miscreants. We witnessed a similar violation of both state and people’s rights over the oil subsidy protests, when Federal Might took over a state facility, the Gani Fawehinmi Freedom Park, without the invitation of the state governor, and without his knowledge. There is only one word for this gross misconduct – Fascism.”

“The signs multiply – from direct acts of impunity to the abuse of the uniformed forces through co-option, such as are being revealed through exposed recordings, shaming a nation through the complicity of both the elected, and the supposedly professional forces of law, order and public security. This is a new low in the life of this nation, and a grave portent for the future of democracy. It bodes ill even for the postponed elections. Is the postponement truly to ensure enfranchisement for the entire electorate? Or to fine-tune a new strategy for the absolute and total cooption of the uniformed services?”

“We insist that the presidential convoy must pass unmolested. We must also insist that a procession of the meanest citizens in this nation be allowed freedom of movement. President Jonathan, it is not too late: LIFT THE SIEGE!” he urged.

The well travelled and internationally respected literary icon also saved a few lines for Chinweizu, Chuks Iloegbunam following their recent media interventions after he was misquoted at the 2015 edition of Vision of the Child themed “The Road To Sambisa”.

“What a lot of blather over nothing, and all on account of erroneous media coverage! What has China to do with my address to school pupils at Freedom Park over their abducted colleagues. But first, please take note of your catastrophic error: I did not deliver a lecture to the school pupils! The article you referred to had nothing to do with them. It was written for the media and circulated to the media, so the umbrage over addressing children in adult language is totally misplaced.

“Regarding the “60” reasons for not voting Jonathan, may I invite you to check the video recordings. My address was ex tempore, conversational, and tuned to what all would agree is their expected level of comprehension. In the process of that address, I turned to the Festival Secretary on the podium and asked, “How many school pupils are with us?” She answered, “Roughly sixty”. I then proceeded to announce: “these are already sixty reasons why I shall not vote Jonathan, all sixty of them.” The media, yet again, has let itself down very badly, and in the process sent Chuks Iloegbulam and company barking frenziedly up the wrong tree. Chinese economic gamesmanship and political agenda for Africa are of general interest to us, but I never cited these as any of the “sixty” reasons for my electoral decision.”

He noted that it is a strange proceeding however that Chinweizu should himself ascribe one of the “sixty” reasons, then work up a lather over his private presumption – “Soyinka has sixty reasons. Is this one of them?” And he proceeds to write an “investigative report” that centres on Chinese commercial adventurism. Now that really boggles the mind and raises troubling questions on the integrity of public discourse. “No matter, demolishing the missing ‘59 reasons’ should be no problem for his fertile mind. We can look forward to some enlightened reading while INEC regroups and puts the nation out of its misery, or the forces of fascism plunge us deeper in its void,” Soyinka’s statement read.