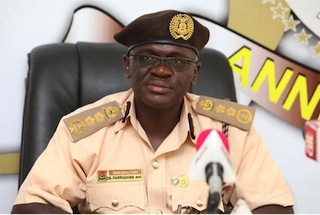 The Nigerian Immigration Service (NIS) in Oyo State says it has arrested a cleric, Olufemi Timothy, and four others for allegedly engaging in child trafficking.

The State Controller of the NIS Command, Innocent Akatu, said in Ibadan on Saturday that the accused persons were apprehended at various locations in Ibadan, the Oyo State Capital.

Among the victims were 12 boys and four girls who were allegedly being used by the accused persons as part of a slavery ring.

“They would be handed over to the National Agency for the Prohibition of Trafficking in Persons (NAPTIP) for appropriate legal actions to be taken against them,” he said.

“Human trafficking is a crime government is trying to end.

“We have young children being taken away from their parents under the pretext that the traffickers would get jobs for them or give them better standard of living,” he said.

He said many of the victims were brought into Nigeria from Benin Republic, Togo and other neighbouring countries, adding that, “they were sold into slavery by those who brought them into the country.”

The NIS boss explained further that those who were arrested by NIS personnel were from Benin Republic and Benue in Nigeria.

He cited the case of a nine year- old boy from Benue who was brought to Ibadan by his brother and sold into slavery.

“He does not know where he is. These children do not receive the wages paid on them. The money goes to the people who brought them. So it is pure slavery.

“Before, when we arrested children like these, we reconciled them with their parents.

“Even the foreigners would be taken to their countries. But we now feel that the method did not help to check the problem.

“That is why we are handing them over to NAPTIP for appropriate legal actions,” Akatu said.