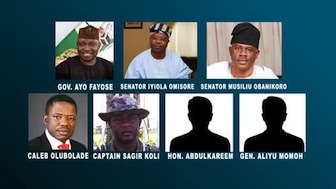 Nigeria’s President Goodluck Jonathan has ruled out investigating the scandalous audio tape of the collusion between military officers and top guns in the Peoples Democratic Party to rig last year’s June 21 election in Ekiti State.

President Jonathan told The Wall Street Journal that the audio was a fabrication despite the confirmation of its authenticity by U.S.-based voice-verification firm, Guardian Consulting LLC.

“It’s all fabrications,” he said of the audio. “Why should I investigate things that are not real?”

Jonathan’s shocking indifference to the scandal that gravely questioned the integrity of the governorship election, said to have been won by Ayodele Fayose of the PDP, triggered melancholic reaction from Dr. Kayode Fayemi of the All Progressives Congress, who allegedly lost.

Adesiyan had confirmed that the conversation took place.

We share the audio transcript of the rigging conspiracy here: