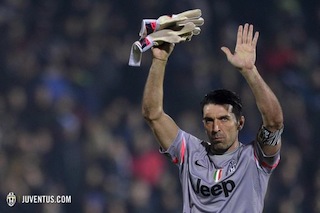 Juventus captain Gianluigi Buffon hit out at the attitude of the Italian champions following Sunday’s thrilling 2-2 draw with strugglers Cesena.

At the Dino Manuzzi stadium, Juve struggled against a Cesena side that has been fighting to get out of the relegation zone all season.

Chili’s Arturo Vidal even missed a late penalty that could have given Juve a nine-point-lead over second-placed Roma, who drew 0-0 at home to basement side Parma — their fifth draw in six games.

“Maybe Roma’s result changed the outlook a little, but a squad like ours shouldn’t be affected by results elsewhere,” Buffon told Sky Sport.

Buffon had to pull off a number of saves in a lively opening period before Milan Djuric beat him with a low shot on 17 minutes.

“It was a great battle,” said Bosnian striker Djuric. “It was great to test myself against the Juventus defence and to score against Buffon was pretty special.”

Juve were back on level terms on the half hour after Alvaro Morata got his head to Paul Pogba’s cross, and then took the lead when Claudio Marchisio pounced on a Fernando Llorente dummy to fire home from close range.

Cesena, however, levelled through Franco Brienza on 70 minutes and Vidal completely missed the target from the spot soon after as Cesena held on for a precious point.

Buffon added: “We just weren’t good enough, especially in the first 20 minutes when we gave away too many counter-attacks.

“With all due respect to Cesena, a team like ours has to be clinical and ruthless and not give them too much space.”

Buffon, 37, admitted he may have been partly at fault, but warned: “Maybe the fault is mine, I’m the captain and maybe I failed to get the message through about how best to deal with this kind of game.

“Nobody’s going to gift us this championship, we have to make sure, me included, that we’re approaching every game with the right attitude.”